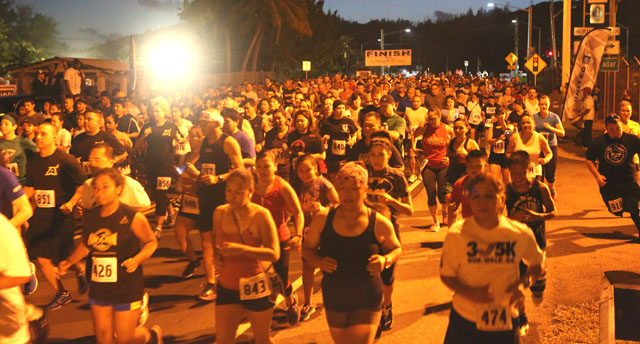 PITI, Guam – Service members and military supporters put on their running shoes to participate in the USO’s 9th Annual 2k-5k Run for our Heroes Dec. 14 at the old USO in Piti, Guam.

More than 1,000 participants showed up in support of the men and women in the armed forces.

“I’ve always been a proponent of bringing people together through a positive experience,” said Ronni Connelly, race director with the USO. “Getting together to support our troops and meeting new people is what it’s all about.”

Connelly started this run in 2006 to get the USO back on Guam after it had been closed for 13 years. Soon enough, the USO was back and better than ever in Tumon.

“All the money we raise now goes to support the USO’s mission in Guam which is to provide services and programs to military members and their families,” said Connelly.

[Participants begin running the 9th Annual 2k-5k Run for our Heroes Dec. 14 at the old USO in Piti, Guam. The annual run began nine years ago in order to get the USO back in Guam. (U.S. Marine Corps photo by Lance Cpl. Alissa Schuning)]

The race has steadily grown over the years and become a favorite for the local community.

“This was mine and my families first 5k ever three years ago, and this is our third year running,” said Petty Officer 1st Class Jami Skornia, a hospital corpsman. “This is my favorite 5k to run because there is a lot of energy and great people.”

Skornia and her family ran in support of all the military branches with each member representing a different branch.

Participants were encourages to run as their favorite hero so the streets were filled with adults and children dressed as super heroes, military members and one runner even wore a Mission Oriented Protective Posture suit.
Running in the MOPP acclimatizes the wearer to it and what better way to do it but at the Run for our Heroes according to Sgt. Matthew Quitugua, Army National Guard chemical, biological, radiological, and nuclear noncommissioned officer.

“I’m running for everybody who is deployed overseas and for my friends who have passed away, people like that are my heroes,” said Quitugua.