While a good portion of the crew took a well-deserved break from operations, work was still in full swing for others as the ship received supplies and fuel for its journey to the Far East.

“This visit to Guam gave our Sailors and Marines the chance to visit a portion of the United States that most people within the 50 states won’t ever get the chance to see,” said Capt. Chuck. Litchfield, Bonhomme Richard’s commanding officer. “It also gave the ship a chance to take on fuel and supplies and to bring aboard personnel from [Helicopter Sea Combat Squadron 25 search and rescue] detachment.”

“I definitely had fun spending time on the beach,” said Aviation Boatswains Mate (Handling) 3rd Class Nicole Gonzalez. “This was my first time visiting Guam and it was great to check out different areas with some friends from the ship. We didn’t have that much time here but I still enjoyed it and wouldn’t mind coming back one day on vacation to see more of Guam.”

USS Bonhomme Richard is currently in the middle of a scheduled deployment for its upcoming hull swap with USS Essex (LHD 2) in Japan. 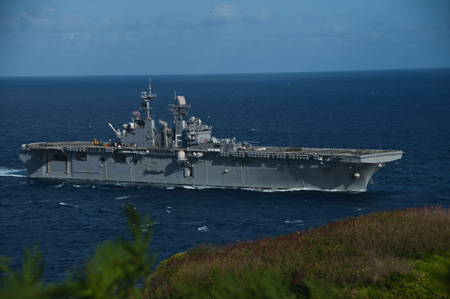