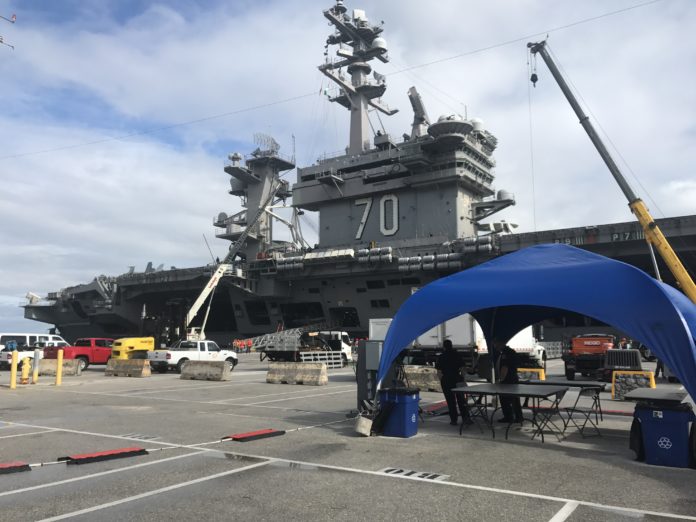 And now the USS Carl Vinson carrier strike group is back and with it comes some 6,000 sailors who will be hitting the shores of Guam for liberty over at least the next few days. “We’re really excited to be here in Guam. We’ve been under way for about four weeks. The sailors want me to stop talking so they can get our here and really enjoy home again. We really appreciate the hospitality the love we feel from Guam and our sailors can’t wait to get out here spend some money and go swim and relax a little bit before we go on the rest of our deployment,” said Rear Admiral Fuller.

The carrier strike group commander says the presence of the strike group is important to the overall safety and stability of this region.  “Our presence matters. If you look at what our presence means in the theatre we assure our friends allies and partners. We provide stability prosperity and security in the region and it’s just important that we are out here because we also reinforce international laws rules and norms as we protect the sea lanes of communication,” said Rear Admiral Fuller.

This strike group is made up of the Nimitz Class nuclear powered super carrier USS Carl Vinson, guided missile destroyers USS Michael Murphy and USS Wayne Meyer and the guided-missile cruiser USS Lake Champlain. USS Carl Vinson Commanding Officer Captain Douglas Verissimo says only one destroyer is in port while the other ships in the strike group are nearby. Captain Verissimo says that on any given day they keep about 15 percent of the ship’s crew on board to stand watch and maintain ship operations. “That leaves a little over about 3,800 sailors who are available to go do what they’d like. Some will stay on base, but I would imagine a good about 3,000 of them will get out in town at some point in any given day over the next few days,” said Captain Verissimo.

A few of those sailors are actually from Guam. Logistics specialists 2nd class Jomar Macaraeg  was born and raised on Guam. “I definitely wanna show my fellow shipmates around, show them some of the great spots and I’m just happy to be back,” said Macaraeg.

James David also grew up on Guam. David hasn’t been back to the island in 11 years. “I wanna eat food you know. I miss the kelaguen, red rice, spend time with my family my relatives are here so and I’m going around the island,” said David.

While here sailors with the carrier group will also be giving back to the community via various community service projects.