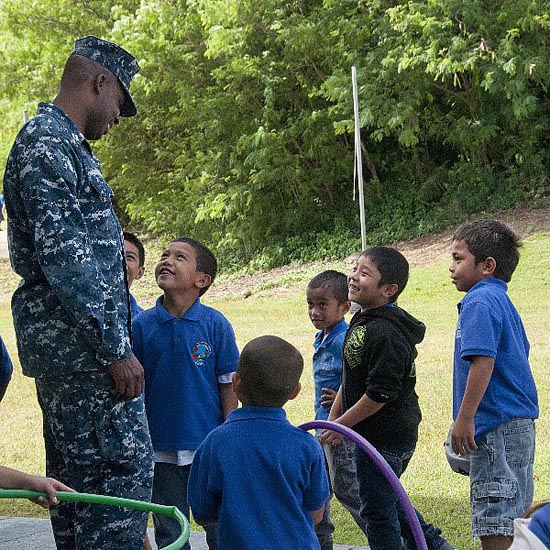 “Every opportunity we have when we stop we try to do a (community relations project) and it gives us a chance to engage with the people who are in that particular culture because it gives our Sailors a better idea of the area we are visiting,” said Cowpens Chaplain Lt. Andrew Francis.

He added that the engagements at the schools were enjoyable as the students asked different types of questions about the types of uniforms the Sailors wore and places to where they’ve traveled.

SEE video of the school vists on YouTube HERE

“It doesn’t matter what job the Sailor has, the kids think every job is a cool job when you get to wear a uniform,” Francis said. “They always ask questions about where we’ve gone and even the types of fish we see when we’re out on the water.”

Sailors met one-on-one with students and helped them with various holiday projects, spoke to them about their Christmas lists and spent time with the kids on the playground.

[Chaplain Lt. Andrew Francis, assigned to the Guided-missile cruiser USS Cowpens (CG 63), talks to students about his naval career during the students’ recess at a community relations event at the Inarajan Elementary School. Cowpens Sailors engaged with students and spoke to them about their naval careers. (U.S. Navy photo by JoAnna Delfin/Released)]

Boatswain’s Mate 3rd Class Bo Rodriguez spoke to students during the crew’s visit and said he felt it was necessary to share career experiences with the students as it gives them a greater understanding of how the Navy operates.

“If I can change one child’s perspective of anything I’ll be happy with that,” he said. “I believe it’s important so that they know what we’re really about and we’re not really out to harm anybody or anything like that.”

Students from Jackysha Green’s kindergarten class at Inarajan Elementary School were able to interact with and talk to Sailors as they worked on homemade Christmas ornaments.

“Many of the students at this point aspire to become service members,” she said. “(It) helps them to understand why it’s important to do well academically so that they can persevere to become service men themselves. We are so glad they were able to come out and spend some time with our kids and show them who they are and talk about what they do.”

Francis said he and his shipmates welcome any types of outreach projects when they are in port and encouraged other commands to volunteer.

“It’s always a good feeling to help out where you feel welcome and each of the (community relations events) they go above and beyond to make it happen and we have fun doing,” he said. “It lets the community know more about the military and the U.S. as a lot of different Sailors come from different places as well.”