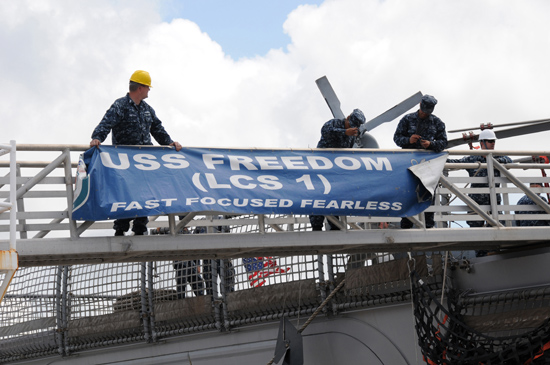 While in Guam, Freedom’s “Gold” crew will participate in community service opportunities, including mentoring island children, caring for the elderly during the Easter holiday weekend and experiencing the local culture.

The ship will also conduct scheduled maintenance, resupply and make any necessary repairs. Of note, a team from the original equipment manufacturer is in Guam to make minor repairs to Freedom’s ship service diesel generators, which experienced three brief failures during the transit. The cause of the failures are under investigation, and engineers will troubleshoot and make any required repairs. An additional engineering team from the Naval Sea Systems Command and the shipbuilder are also in Guam to conduct preventative and planned maintenance, which is required every 25-30 days as part of the ship’s operational cycle.

“The crew has worked really hard on this ship to get it ready both in a training aspect and an operational aspect for her first deployment,” said Cmdr. Timothy Wilke, Freedom’s Gold Crew commanding officer. “As we continue to march westward, we are the first littoral combat ship pulling into Guam.”

The littoral combat ship design is unique in what Wilke calls a “plug and play” ship. Freedom is fast, agile and designed to employ modular mission packages that can be configured for numerous operational needs including maritime interdiction, anti-drug operations, mine counter measures and anti-submarine warfare.

“Depending on what you want to do, it is incredibly maneuverable,” Wilke said. “Driving the ship, we can spin on the nose, spin center line, back the ship up (or) walk the ship sideways. These are features that are really needed and what the ship was really built for, in shallow waters. We need to be maneuverable.”

Due to the 14-foot draft of the ship, entering into shallow waters, including swamps and other wetlands, will enable Freedom to accomplish many of her surface operational demands. In addition, Freedom employs a paint design that disorientates and confuses the human eye, helping the ship’s hull avoid visual detection. 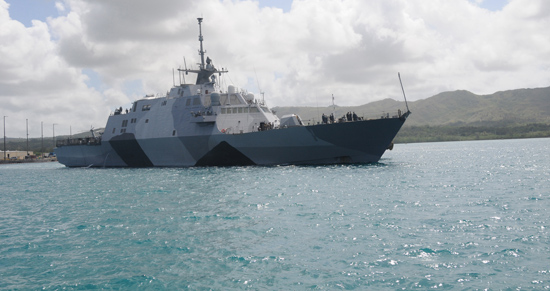 “We are deployed to conduct a whole myriad of tasks across a wide spectrum of operations. That is what we were trained for, it’s what we have been certified for, and that’s what we bring to 7th Fleet,” Wilke said. “We stand ready to serve that commitment.”

Freedom will continue to sail west to engage and bolster regional partnerships with navies in Southeast Asia during her eight-month deployment, showing a clear signal of the Navy’s enduring commitment in the Pacific.