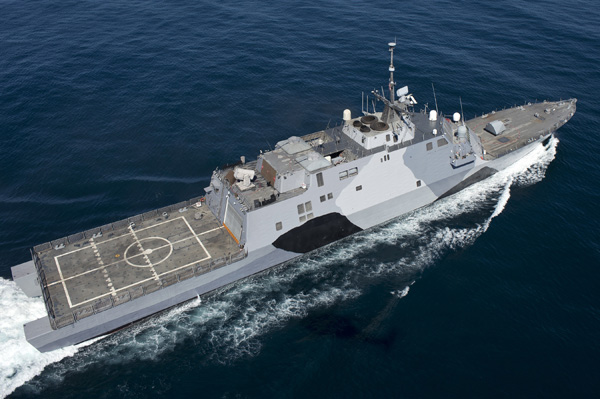 While the crew will have time to rest, relax and reset, Freedom will receive fuel and supplies for the next underway period as the ship wraps up a maiden overseas deployment to Southeast Asia that began last March.

Over the past several months, Freedom has worked with many regional navies that operate comparable-sized ships during a series of port visits, exercises, and exchanges. These engagements directly support the Asia-Pacific rebalance and further reinforced cooperation and interoperability among the Navy’s partners and allies throughout Southeast Asia.

Prior to arriving in Guam, Freedom conducted a passing exercise (PASSEX) with the Bangladesh navy ship BNS Somudro Joy (F 28), supported humanitarian assistance and disaster relief (HA/DR) efforts in the Philippines, as part of Operation Damayan, and conducted a port call in Muara, Brunei.

USS Freedom’s first rotational deployment to Southeast Asia began March 1, when the ship departed San Diego and commenced a Pacific Ocean transit that included port visits in Hawaii, Guam and Manila. Freedom used Singapore as a logistics and maintenance hub between April 18 and Nov. 16, during which she participated in the International Maritime Defence Exhibition (IMDEX), three phases of the bilateral naval exercise Cooperation Afloat Readiness and Training (CARAT) with Malaysia, Singapore and Brunei, and the multinational exercise Southeast Asia Cooperation and Training (SEACAT). During port visits, Freedom hosted thousands visitors from throughout Southeast Asia.