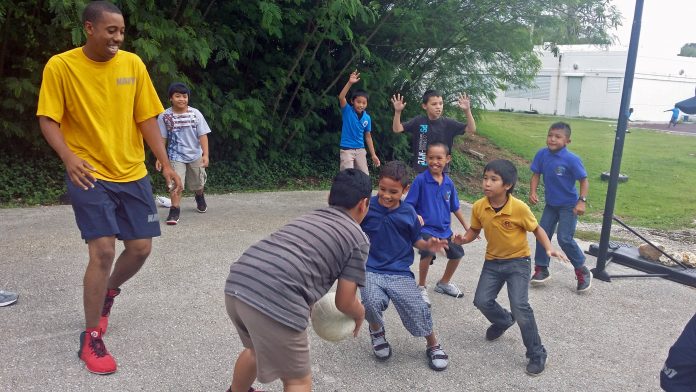 COMREL projects are a great way for Sailors to enjoy the local culture and while also serving others.

Eighteen Halsey Sailors visited Inarajan Elementary School to interact with the students and provide positive mentorship. The students and Sailors sang songs, told stories, played games and exchanged gifts. The students also got the opportunity to learn what the Sailors do onboard Halsey.

Logistics Specialist First Class Kristian Fabian said he and other shipmates greatly enjoyed being able to engage the young minds of children as they explained and shared their jobs in the Navy as well as their hobbies and favorite sports.

On the second day, Sailors assisted Island Girl Power (IGP) in their initiative to clean and preserve neighborhood parks to get back safe and clean places to play. During the five-hour event, Sailors assisted IGP in removing leaves, pulling weeds and moving debris and fallen tree branches.

According to Ensign Ruben Maldonado, as the Sailors worked with IGP, by their words and example, they empowered the girls to make healthy lifestyle choices, encouraged positive self esteem and inspired community pride and service.

“I especially enjoyed seeing the local community come together to preserve the park for future families and children to enjoy,” Maldonado said.

[Seaman Vince Moulterie plays basketball with the students at Inarajan Elementary School during a community relations (COMREL) project. Volunteering at the local elementary school was one of the three COMREL projects Halsey participated in while in port Guam. Homeported in Pearl Harbor, Hawaii, Halsey is currently on deployment to the 7th Fleet area of operations supporting security and stability in the Indo-Asia-Pacific region. (U.S. Navy photo by Ensign Erica Bauer)]

On the last day, Sailors volunteered at the Guam Animals in Need (GAIN) project where they provided human interaction and affection to abandoned or mistreated animals by taking turns feeding and caring for the animals.

“These COMRELs have been another success,” said Fabian “Sailors have not only made a difference in the community, but also their personal lives.”

COMREL projects are integral to Sailors learning and understanding the local culture and providing a positive outlet to relieve stress by making connections. COMRELs are critical to the Navy’s mission of operating forward and provide increased presence where American warships operate. They also provide a human face to locals and help them view the U.S. Navy as not just a warfighting force, but as a partner in building secure and prosperous communities.

Homeported in Pearl Harbor, Hawaii, Halsey is currently on deployment to the 7th Fleet area of operations supporting security and stability in the Indo-Asia-Pacific region.