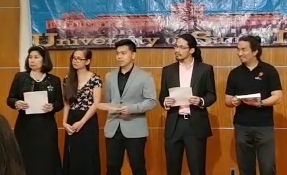 The University of Santo Tomas Alumni Organization of Guam, known for its charitable contributions to the island, inducted its 2017 officers over the weekend.

Guam – On Saturday, the University of Santo Tomas Alumni Organization of Guam (USTAOG) held an induction ceremony for this year’s new officers and Board of Directors.

Established in 1611, the University of Santo Tomas is one of the oldest universities in the Philippines and the oldest existing university in Asia. In 1985, the UST Alumni Organization of Guam was formed, consisting of “Thomasians” who have been known for their community service efforts around the island. Some notable endeavors include donating scholarship money to the University of Guam, donations to St. Dominic’s Senior Care Home, the Guam Diabetes Association and other organizations, feeding the homeless, and their medical mission outreach.

Several senators were in attendance at the event, including the guest of honor, Sen. Jim Espaldon, Sens. Therese Terlaje, Regine Biscoe Lee, Joe San Agustin, Dennis Rodriguez, Jr., and Sen. Frank Aguon, Jr., who presented a resolution to the organization.

“This is Resolution No. 44-34 (COR), introduced by yours truly and all of the senators you see before you and all of the other senators of the 34th Guam Legislature, and is relative to recognizing and congratulating the University of Santo Tomas Alumni Organization of Guam (USTAOG) on the induction of its 2017 officers and Board of Directors, and commending the outgoing USTAOG officers for their service and to further extending a sincere thank you to the organization for its many years of dedicated humanitarian projects and tremendous contributions to our island community, and wishing them continuous success in their services to the people of Guam and to the region,” Aguon stated.

The Induction Ceremony was held last Saturday at the Westin Resort and Spa Unnai Ballroom.