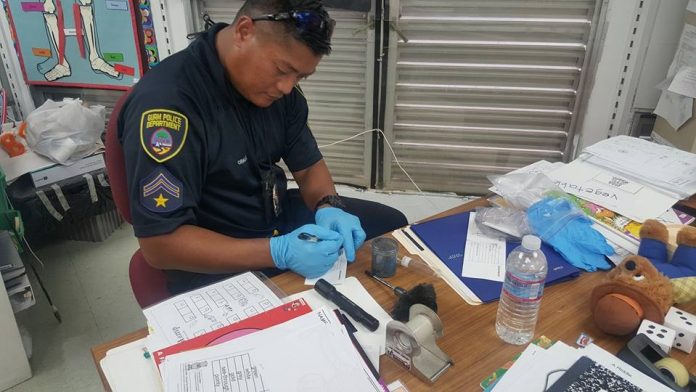 The Guam Police Department responded to a break in early this morning at the Agana Heights Elementary School, where more than half of the classes were broken into.
Guam – After a GovGuam holiday, faculty and students at the Agana Heights Elementary School returned to school to find their campus broken into this morning.
AHES Principal Hannah Gutierrez says, “About 6:15, one of my employees reported to work and while he was blowing the leaves in the hallway, he noticed that some of the rooms were open, and upon inspection, he noticed some rooms were tampered with and then when he did walk around, he noticed eight classrooms were broken into. He noticed a tv was stolen and that point that’s when he called GPD.”
AHES Principal Hannah Gutierrez says she’s thankful there was no extensive damage to the school. She says, “So far we found 10 classrooms that were broken into, but minimal damage. At this point, we know three TVs stolen and one printer. They went through the doors, filing cabinets, but not too much extensive damage at all.”
Gutierrez explains that the last time Agana Heights Elementary School was broken into was back in 2009. She says, “I just want to say that if they see any suspicious activity in the community as soon as possible if there’s any information they can call GPD and GOE so we can find out who’s responsible for this matter.”
Gutierrez is asking the community to help protect the schools, but what about the security cameras schools were supposed to receive two years ago?
Well, the General Services Agency said they should be wrapping up the procurement process soon. Robert Kono from GSA says that the evaluation committee finished reviewing the two bids that were submitted. Now they’re just waiting for a response from one of the bidders. Kono explains that the evaluation committee is made up of Guam Department of Education officials. After the committee evaluates the two bidders, they will go to Phase II, which is the opening of the price, and if there is no protest, after 15 days, GSA will announce who the project is awarded to.
GDOE Superintendent Jon Fernandez says classes for Agana Heights Elementary School will resume tomorrow.