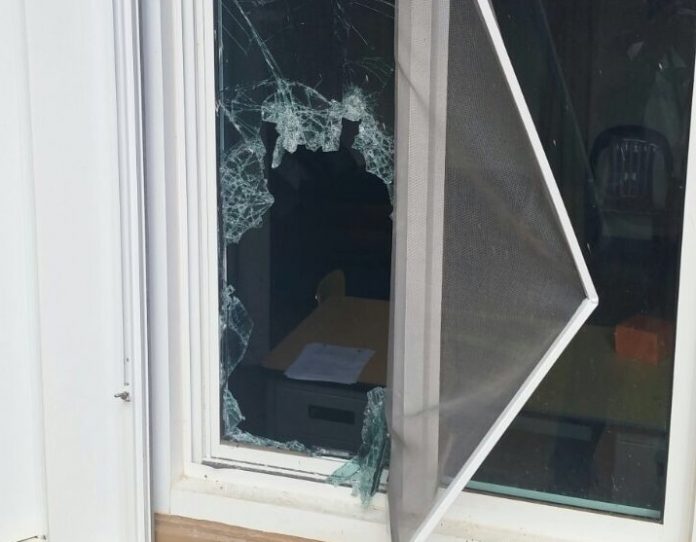 Just a week after George Washington High School was broken into, vandals hit another school over the weekend. This time a campus in Barrigada.
Vandals ransacked Untalan Middle School over the weekend and damaged windows of four different offices,  classrooms and a girls bathroom.
Acting GDOE Deputy Superintendent Chris Anderson says, “Sometime Saturday evening, three to four classrooms and several offices were broken into. They contacted GPD who ensued an investigation. Our maintenance team were there this morning to go ahead and assess the damages. According to Principal Reyes, a TV was stolen and maybe a few other items but nothing high end.”
Anderson says there’s no estimate on the cost of damage just yet, but there was no interruption on instructional time. Classes were held this morning.
He says, “The school day continued as usual, they were able to make adjustments to the areas that were broken into.”
Just last weekend George Washington High School was vandalized and now with this recent incident, that makes two break-ins in just a little over a week. What ever happened to the Secure Our Schools Act which would provide security camera equipment in all 41 DOE schools?
Anderson says, “The issue in terms of the bids were the specifics of the video camera equipment we need to effectively do this. Until that gets resolved, we’re in an impasse with getting those cameras procured.”
Anderson says DOE views these vandalism as a crime against our students. He says, “This is really unfortunate for our schools to be affected in this way. Of course GPD is doing their investigation and encouraging folks to call the Guam Crime Stoppers with any information so we can catch the people responsible for this. Hopefully the message will go out that this type of crime won’t be tolerated.”
DOE officials and GPD are asking anyone with information to please call Guam Crime Stoppers at 477-HELP or 477-4357.