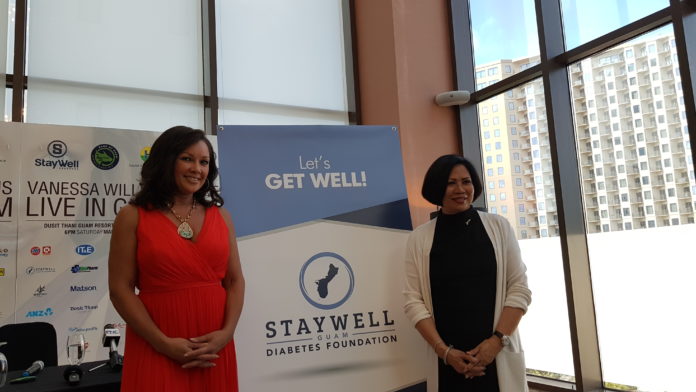 Guam – Multi-platinum recording artist, actress and broad-way star Vanessa Williams is here on island and set to take the stage tomorrow night in an effort to raise awareness about an epidemic which ravishes our island.

Her soulful voice is beautiful and strong but her heart is even stronger and her soul a beacon of compassion as the motive behind her visit to Guam isn’t to sell tickets but instead to raise awareness about a disease which has plagued our island for years…diabetes.

One of the reasons why this is such an important cause of awareness for me is my grandmother died at 64 which is relatively young,” she revealed.

Williams shared that she lost her grandmother to diabetes. She recalled how her grandmother stubbed her toe, and while it is a seemingly common injury, her grandmother’s diabetes turned the injury into a dire situation which ultimately led to amputation. Having this occur in her life, Williams understands first hand the tragedy that diabetes can cause and it has provided her with a reason not only to raise awareness but to promote a healthy lifestyle.

And while living a healthy lifestyle on Guam is constantly a battle with all the delicious island cuisine Williams points out that its all about taking care of yourself, eating healthy, exercising and setting the example for our youth. Williams has been on island for five days and since here she has taken in everything Guam has to offer while making sure to spread the word and raise awareness in the fight against diabetes

“I have such a warm welcome from everyone that I have met I have had a chance to do thing I love to do and new things i never thought I would do,” expressed Williams.

Williams will be performing tomorrow night at the Dusit Thani for the Guam Diabetes Foundation Gala at 6 pm.

But this may not be the last time we see Williams on island as she has embraced the island and our hospitality.