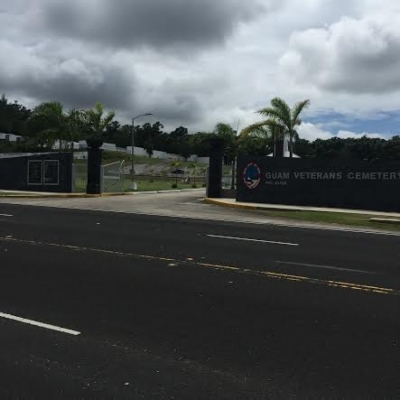 Back in August the VAO’s water was cut off due to an outstanding balance of $180,000.

Guam – VAO Administrator Martin Manglona says some residents have illegally connected to the Guam veterans cemetery water line causing the VA to pay for the residents bills and causing their own bill to surge upwards to $120,000.

Manglona tells PNC that the VA is disputing its $120,000 bill on the grounds that the meter is illegally connected to other resident’s houses.

“When we shut it down, the main valve, we shut it at night then we took the meter reading in the morning, between 8 to 12 thousand gallons I’m losing and the water had to go somewhere else, and when we shut off the main valve, we got people who are adjacent to our cemetery came down and complained their water was shut down, evidently someone is connecting on that same main valve,” said Manglona.

Manglona says he has met with Guam Waterworks Authority officials and told them people are illegally connected to the VA’s meter and this explains why the bill is so high. Manglona says the VA even made a payment of 80-thousand to GWA in December and since then the water bill has surged to $120,000 in five months.

“They have my meter on the main section that goes along the main road towards Nimitz hill. So I told waterworks to relocate my water meter going into the cemetery so anything that goes into the cemetery is my use not anybody’s use, I’ve been disputing because I don’t use that much water,“ says Manglona.

Manglona doesn’t know how many families are connected or even how long they’ve been connected. Back in august the VAO’s water was cut off due to an outstanding balance of $180,000. At the time, the VA found several leaks, including a severed pipe, but fixed the issues at that time. Meanwhile, GWA spokesperson Heidi Ballendorf says that GWA has not been made aware of any illegal connection to the VAO. Ballendorf did confirm that the VA is disputing their bill.