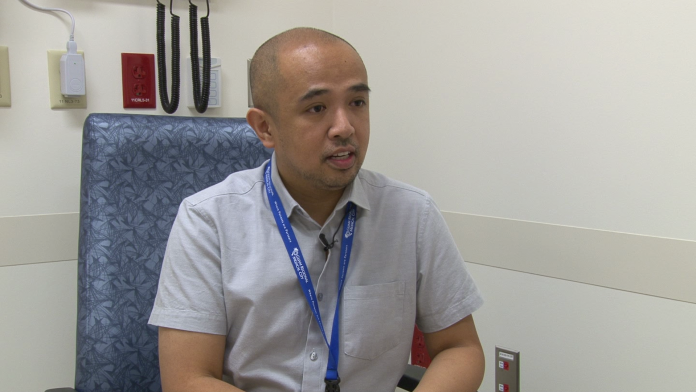 Guam – A case study performed right here on Guam may have you thinking twice before you pick up that e-cigarette or vape. A case report written by a team of doctors from the Guam Regional Medical City that was recently published in a medical journal links vaping to an extreme form of bleeding in the lungs.

So far, based on the available medical data, this particular case is the first of its kind to be thoroughly studied and investigated in the world–a patient presenting with diffuse alveolar hemorrhage or severe bleeding in the lungs with the cause directly linked to vaping.

Dr. Michael Agustin, a pulmonologist with GRMC, led the study on this particular patient. He explains a 33-year-old patient arrived at GRMC with lung problems. Initially, they thought it might be pneumonia.

“Does this patient have any inflammation? Are there any other systemic diseases that have caused this. We’d run all the tests for him. When this turned out to be negative then that’s the time we decided we have to get the biopsy of his lungs,” says Dr. Agustin.

By this point, they already knew they were dealing with diffuse alveolar hemorrhage. But in this particular case, the bleeding was severe and seemed to have saturated his airways.

“[We] go back to the patient and ask him again his history. He had disclosed about vaping, it had increased and the amount of vaping and of course just like he told us, again, there was a remarkable increase on the use to that prior to this incident,” he notes.

We asked the same questions you’re probably thinking of right now. Does this patient have a history of smoking? Any other risk factors that could contribute to his condition like heart disease, hypertension, diabetes, inflammatory disease, obesity?

“That was extensively ruled out from the patient. We ask them if they have any family member with inflammatory disease or connective tissue disease that could also increase the risk for patient who would bleed in their lungs. Of course, occupation would be one and another thing is some cardiac problems which is very specific if we have a patient who presents to us coughing up blood and things like that. We make sure that infection is ruled out and all of that was ruled out,” said Dr. Agustin, noting that the patient was otherwise healthy.

While the patient was a former smoker, Dr. Agustin doubts smoking to be a contributing factor for the patient’s lung disease as there are currently no known published medical cases linking smoking of conventional cigarettes to DAH.

“Smoking related diseases, again, sometimes, especially tobacco, we see this in extreme, in elderly people. It takes time for it to actually come to your system and destroy it.. So that’s why you have like emphysema, and you have chronic bronchitis and the whole realm of COPD. In case reports of tobacco alone causing hemorrhage of the lungs, we haven’t seen any of that. We have seen cases on cannabis and cocaine that was reported in terms of inhalation or injury that can causes blood into your lungs, but particularly for cigarette, we don’t have any, from our knowledge, we don’t have any reports of that,” he explains.

While this may alarm some vapers, Dr. Agustin acknowledges that there is still so little known about the long term effects of vaping, especially in an era which has seen a recent boom and a surge of those switching from conventional cigarettes to e-cigarettes.

“They’ve seen also the amount of people in the United States that are using conventional cigarette had decreased because there’s a rise of this e-cigarette use. But again, the context for this is that it’s a safer alternative but it’s also not harmless,” he says.

With so little empirical data available, even the FDA has taken a step back and extended its regulation of the e-cigarette industry until 2022. And as with any form of inhalant, whether it be cigarettes, e-cigarettes, cannabis, cocaine or other toxic chemicals, there will always be extreme cases.

“Again, one case report does not mean everyone,” he assures.

If you’re wondering about the patient who suffered from DAH, Dr. Agustin says he was successfully treated and has even quit vaping.

Read the release from GRMC below:

(GRMC) – An article outlining the dangers of vaping, written by four doctors from Guam Regional Medical City, was published in Case Reports in Pulmonology. In their case
report, Dr. Michael Agustin, along with Dr. Michele Yamamoto, Dr. Felix T. Cabrera and Dr. Ricardo Eusebio, discuss their findings based on the case of a patient with significant bleeding in to the lungs possibly linked to vaping.

An excerpt from the report states, “We report a case of young male with respiratory failure and later found to have diffuse alveolar hemorrhage syndrome (bleeding into the lungs) that is likely induced by aggressive vaping. After Mayo Clinic confirmed our suspicion upon further review of our lung biopsy, we then submitted the case for publication. This is the first published case report (in the literature) on alveolar hemorrhage secondary to vaping.”

The report also notes the increasing popularity of vaping and electronic cigarettes and the lack of research regarding any associated health-related risks. It further notes that while vaping was designed as a safer alternative to smoking regular cigarettes, there is no evidence to support this and suggests that based on their findings, the opposite may be true.

The case report, which was published on June 7, 2018, also stated the doctors’ goal in publishing the report was “to promote awareness on possible serious complications of this innovative technology designed as a safer alternative to traditional cigarettes.”

Case Reports in Pulmonology is a peer-reviewed journal that publishes case reports in all areas of pulmonology, prevention, diagnosis and management of pulmonary and associated disorders, as well as related molecular genetics, pathophysiology, and epidemiology.