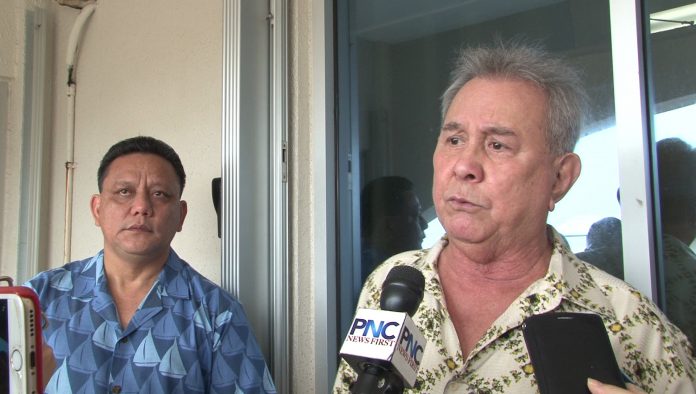 Guam – For the first time since sex abuse allegations surfaced against Archbishop Anthony Apuron, Vatican officials made an effort to meet with one of the ousted archbishop’s accusers Roland Sondia.

A deposition was the expectation but that’s not what happened. In fact, Sondia’s attorney says it may never happen.

The meeting happened at the Chancery Office in Agana Heights as picketers chanted and prayed outside with signs calling for the laicization of Apuron.

But it’s what happened inside that everyone was eager to learn about. Several Vatican investigators are on island to take depositions from alleged victims and witnesses as Apuron faces a canonical trial in Rome.

Sondia was scheduled to meet with canon lawyer Cardinal Raymond Burke who will also act as the presiding judge, Father James Conn and Father Justin Wachs at 10 this morning. But by 10:15 they were told that because there was a witness meeting with the three Vatican officials, their meeting would be delayed.

Turns out, it was Deacon Steve Martinez who stepped out of that earlier meeting. Martinez has been an outspoken critic of Archbishop Apuron. Lujan later revealed that another witness was scheduled to meet with the visiting delegation at 9:30 am but that witness failed to show up. Lujan declined to identify the witness.

It then came time for Sondia and his attorney David Lujan to meet with the Vatican officials. It was a brief meeting, lasting only about 15 to 20 minutes. Lujan says they only discussed the procedure for taking a deposition. And he later clarified that they only met with one person: Father Justin Wachs.

“The procedure would be that the testimony of Roland will be taken by Cardinal [Raymond] Burke, who’s the presiding judge. The prosecutor is Father [James} Conn … so Father Wachs would be the person that’s transcribing that,” explained Lujan. “And then he’ll prepare it and Cardinal Burke will rule, he presides over the deposition.”

Lujan added: “So when it’s all done, we were informed or rather he informed us that Roland will get a chance to review all the transcripts, make corrections if there’s any that he believes that does not truly reflect his answer.”

But there’s one problem.

“The gist of it is that Roland will not be represented in there and they will not allow me in there,” noted Lujan.

Because of this, Lujan says his client will not be giving a live deposition. Instead, they will submit an affidavit or declaration.

“Of course they’re willing to accept it but he did warn that the presiding judge, because he may be affected by the fact that he did not witness Roland’s demeanor while Roland [would testify] or being asked questions, and so of course we informed them that we agree, we understand that and that’s also the same thing in civil cases, but that our position is that we will submit something in writing but we’re not going to allow them to be the only persons to question Roland,” said Lujan. He added that this meeting will now likely set the precedent for his other clients that have also accused Apuron of sexual abuse. They are Walter Denton, who’s currently in Arizona, and Roy Quintanilla, who’s currently in Hawaii.

Sondia, meanwhile, describes what this process has been like for him.

“I’m still just overwhelmed with everything that’s going on. It’s like I’m just reliving everything again,” he said.