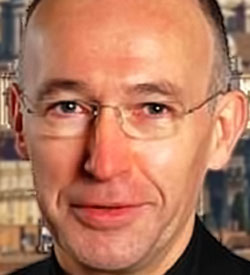 Guam – Archbishop Martin Krebs, Apostolic Delegate and Papal Nuncio to the Pacific, arrived on Guam for two days of meetings.

Following is his agenda with information on how to contact him.

* Tuesday. July 15. Private meetings until 1pm with Tuesday any one who wishes to meet with him LAY or Clergy.

Archbishop Krebs was originally scheduled to arrive on Saturday, July 12, but passing Tropical Storm Rassasun delayed his arrival until Sunday.

Archbishop Krebs was appointed by Pope Francis, as Apostolic Delegate to the Pacific Islands.

According to a release from the Archiocese of  Aganaa Archbishop Krebs “comes on a pastoral visit desiring to meet with a number of different realities of the archdiocese.”

“The Apostolic Delegate visits every diocese for which he has a responsibility on behalf of the Holy Father,” Archbishop Krebs said in an e-mail message recently. “During that kind of visit, the Apostolic Delegate tries to meet different realities of the local churches.

“Pope Francis teaches us that as the Church established by Christ, all bishops and clergy are called to be humble leaders as well as servants of the people,” said Archbishop Anthony. “Again, I welcome our Apostolic Delegate to our island.”

Archbishop Krebs was born in Essen, Germany 56 years ago.  He was ordained a priest in 1983. He obtained a doctorate in Canon Law entered the diplomatic service of the Holy See in 1991. He was ordained Archbishop in November 2008.

Appointed by Pope Francis, Archbishop Martin Krebs is considered Apostolic Nuncio to those Pacific islands which have diplomatic relations with the Holy See. He is the Apostolic Delegate to those which do not.