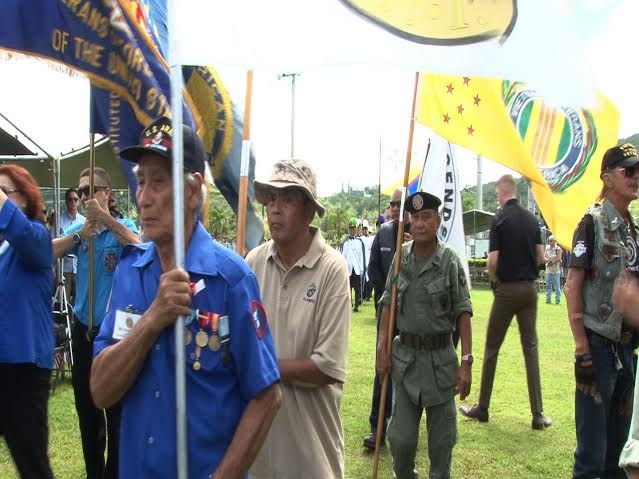 U.S. Veteran’s were honored during a special ceremony held at the Governor’s office at Adelup this morning(Weds)

Guam – Veterans gathered on the lawn of Adelup this morning for a special ceremony that was held in honor of Veteran’s day.

November 11th is known worldwide as Armistice day or remembrance day. “For Americans we call it Veterans day the intent of November 11th however shares one cause it’s to pay respects to those who have served,” said Andersen Air Force Base Brigadier General Andrew J. Toth. Toth is well aware that Guam is full of loyal Americans who have served their country. “It’s no secret that the men and women of Guam serve in the military at a rate that is 3 times higher than the rest of the country.”

Guam’s tradition of service for the U.S. military is not only rooted in history it continues to this day. Governor Eddie Baza Calvo spoke about this saying, “About a month ago we sent off a group from the Guam National Guard to Afghanistan and again our sons and daughters have picked up the mantel of duty and have carried it with honor and courage to serve our people and our nation.”

We at PNC thank our veterans for their service and we wish you all a Happy Veterans Day.