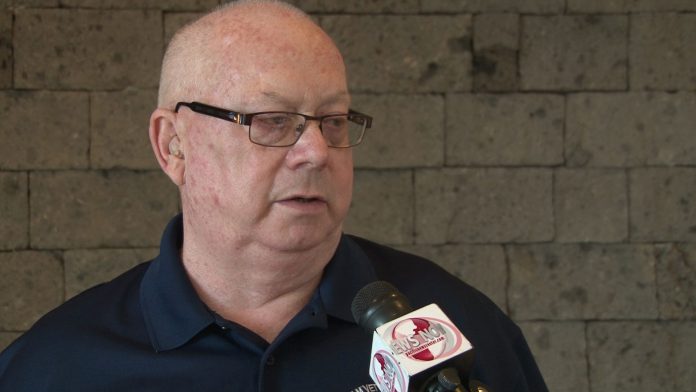 Vietnam Combat Veteran and host of K57’s Vet Talk, Tom Devlin, believes there have been too many failures in the Veterans Administration.

Guam – Host of K57’s Vet Talk Tom Devlin says confidence in the VA system here on Guam and nationwide continues to drop, especially because of the controversies that have plagued the administration over the last few years.

A retired Vietnam combat veteran, Devlin was the guest speaker today at the Rotary Club of Tumon Bay where he talked about issues within the Veterans community.// Devlin believes many of the failures within the Veterans Affairs administration are due to employee mistakes, many of whom get away with it scot-free.

“We had a secretary of veterans affairs that had to resign. Why did he have to resign? Things were going wrong. The president probably told him you’re not gonna resign, I have to let you go. But the president of the United States is responsible and Congress is responsible and they have to change things. I think right now there’s too much failure,” says Devlin.

Meanwhile, Congresswoman Madeleine Bordallo announced today that she has requested the Government Accountability Office to conduct a review of Guam’s Community Based Outpatient Clinic following complaints about the lack or delay of services being provided at the C-BOC. Devlin hopes this review will be done right.

“My own personal opinion is that if they’re going an audit of the CBOC, I’d like to see the same audit they do in Las Vegas, New York City, in California. We should have the same audit done on Guam that they do in the states–no difference. Everybody’s the same,” Devlin notes.

You can read the Congresswoman’s press release below:

Washington, D.C. – Congresswoman Madeleine Z. Bordallo today requested that the Government Accountability Office (GAO) conduct an independent review of the Guam Community-Based Outpatient Clinic and the services it provides to veterans on Guam. She made this request consistent with the Guam Legislature’s resolution 111-33 that sought an investigation into the Guam CBOC.

Congresswoman Bordallo believes that the GAO’s review would provide an objective analysis of the current conditions at the CBOC and provide candid and helpful guidance on ways to address potential issues that are discovered by the review. Specifically, Congresswoman Bordallo requested that the review focus on seven areas of concern that have been raised by veterans: health care quality, patient waiting times, follow-up care appointment delays, CBOC staffing level, CBOC staff retention challenges, CBOC staff work environment, and outreach programs.

“We have made progress in improving health care provided to veterans on Guam, but many continue to experience difficulties at the CBOC. I requested that the GAO conduct an independent review of the CBOC and the services it provides to Guam veterans. I believe that this GAO review is the best way to accomplish the intent of the Legislature’s resolution. A GAO review would provide an objective analysis of the challenges at the CBOC as well as provide recommendations on how to resolve these issues so that we can provide Guam veterans with the care that they deserve. I look forward to working with the GAO, VA, local leaders, and community stakeholders to continue to improve the services our veterans receive on Guam.”