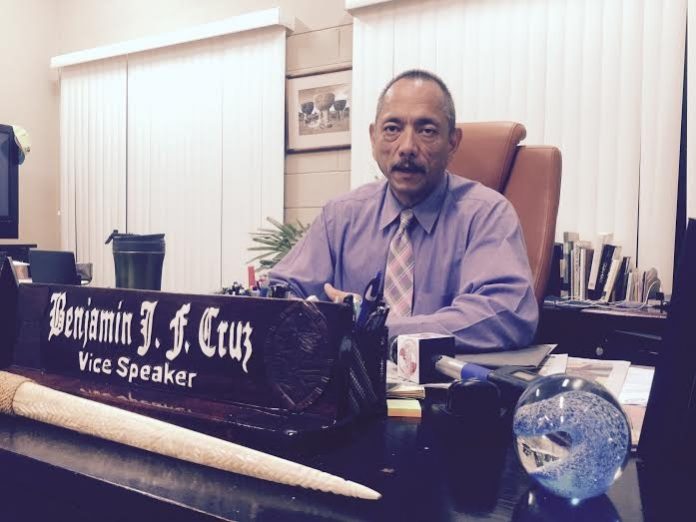 Cruz is questioning $1.2 million in overspending at the Governor’s office and he believes the overspending may be due to retro pay.

Guam – Vice-Speaker B.J. Cruz believes that the Governor’s Office may have spent $1.2 dollars to give retro pay to it’s staffers. Cruz is asking for the documents to verify this.

Vice-Speaker B.J. Cruz says an oversight hearing with the Department of Administration showed $1.2 million dollars in over expenditures at the Governor’s office. “I asked Joey I said can you explain this? Well he had no explanation for it and they were going to be moving some money in,” said Vice-Speaker Cruz.

However the Vice-Speaker believes he has the explanation. Cruz says it seems as if the Governor’s Office may have given their staffers raises and then given them retro payments for raises. The Vice-Speaker came to this conclusion after he noticed that in December the Governor’s office payroll increased by about $50 thousand dollars. This suggests raises. He then multiplied that $50 thousand dollar increase by the number of pay periods in that year and it came to about a million dollars the same number they overspent by. This suggests retro pay.

“So I said well then they must’ve got retro pay for everybody,” said Cruz. The Vice-Speaker says the problem with this is that this retro pay was not authorized by the public law that authorized retro pay for the Governor Lt. Governor and Senators. “The public law did not provide an appropriation for the rest of the unclassified service it was only supposed to be for the elected leadership,” said the Senator.

If these are indeed raises and if they did indeed get retro pay in December of 2014, the Vice-Speaker says the timing is questionable. “It’s within five weeks of the election being certified and a very successful election being certified,” said Vice-Speaker Cruz. The Senator says that these employees were not included in the Hay study and in the competitive wage act which gave raises to GovGuam employees based on Hay recommendations.

The Governor’s office issued a response to Vice-Speaker Cruz’s questions saying there wa no illegal or improper payment made. The Governor’s office states that their staffers did not receive a single pay raise before the Hay plan took efffec and “Instead in December Gov. Calvo and Lt. Gov. Tenorio decided to reward the hard work of their staff after four grueling years of sacrifice without just compensation.”

READ RESPONSE FROM GOVERNOR’S OFFICE BELOW:

“There was no illegal or improper payment made.

Governor’s Office staffers did not receive a single pay raise before the Hay plan took effect. They received no increment. As a matter of fact, the senior staffers took a pay cut for over a year, along with the governor, lieutenant governor and the cabinet. This is in stark contrast to previous administrations, when staffers were given periodic pay raises. This is the first administration in many where the Governor’s Office did not cash out unused leave hours at the end of the term. This practice also happens at the end of every legislative term.

Instead, in December, Gov. Calvo and Lt. Gov. Tenorio decided to reward the hard work of their staff after four grueling years of sacrifice without just compensation. This came after implementing pay raises for every other class of government employee, paying down liabilities to employees and retirees, eliminating the deficit, and finishing the term in office.

The books are not closed on the Executive agencies, so we don’t have a full accounting of the purported $1.2 million shortfall, or if the amount is accurate. But we can assure Vice Speaker Cruz that any expenditure we made was done properly and above board.”

APPROPRIATIONS CHAIR QUESTIONS $1.2M IN GUBERNATORIAL OVERSPENDING
(Hagåtña – November 9, 2015) Over $1.2 million in anomalous overspending for the offices of the Governor and the Lieutenant Governor has compelled appropriations chair Vice Speaker Benjamin J. F. Cruz to verify what some have alleged to be a million-dollar retroactive payment in December 2014 for an entire year of salary adjustments to gubernatorial employees. Cruz has requested records, including personnel actions, from the administration to verify the payout—one whose legality, if the disbursement for this purpose is confirmed, will likely be called into question given the absence of a matching appropriation as indicated in an official government revenue and expenditure report.
In a letter to Governor Eddie J.B. Calvo this morning, Cruz noted that his concern stems from a deficit in funds available—$1,028,871 and $219,095 for the Offices of the Governor and Lieutenant Governor, respectively—as reported by the Bureau of Budget and Management Research’s (BBMR) Consolidated Revenue and Expenditure Report as of September 30, 2015.  Information Cruz subsequently received regarding pay increases and retro pay allegedly issued in December 2014 to Adelup staff would further mire the administration’s fiscal predicament, as such payments are unauthorized given the lack of appropriations to cover the expenditure.
Cruz points out that Guam law (4 GCA §§ 6207 and 6207.1) authorizes the Governor and the Lieutenant Governor to establish necessary positions “provided, however that no person shall be appointed to fill such a position in the absence of an appropriation to pay the salary set for such a position.”
According to data from the government’s financial management system (AS400), the combined salaries and benefits per pay period for both gubernatorial offices—which averaged approximately $210,000 before December 2014 and $260,000 afterwards—jumped to over $1 million during a single pay period that month (see Figure 1).
“As I am unable to discredit the above financial information despite my best efforts, what I find most alarming is the mere possibility that retroactive pay may have been issued to gubernatorial staff in December of 2014, which is a breach of [4 GCA §§ 6207 and 6207.1],” said Cruz, who further stressed the potential impropriety of the retro pay issued under this authority given the over-expenditure indicated in BBMR’s reporting.
“Though we have disagreed on many matters in the past, I continue to believe that you respect the rule of law and want to find the truth wherever it may lead,” concluded Cruz in his letter to Calvo.
The Vice Speaker has requested the Office of the Governor to furnish records to confirm or disprove the issuance of retro pay in December 2014, as well as the Department of Administration and BBMR to provide gubernatorial employees’ personnel actions and GG1 forms that were processed, approved, or made effective that same month.