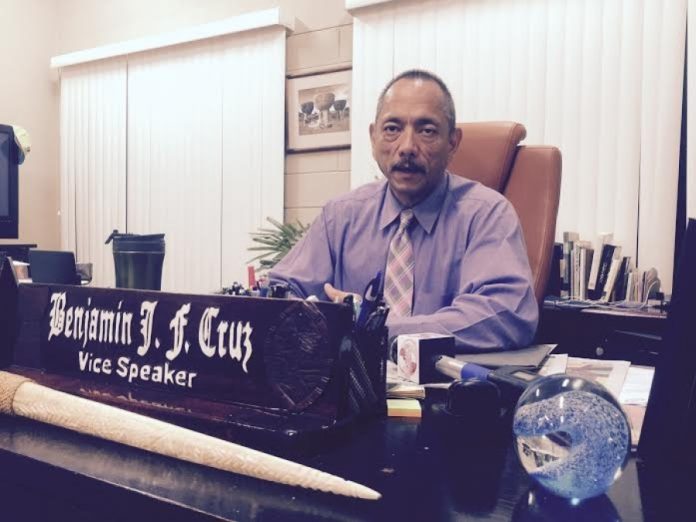 Vice-Speaker B.J. Cruz is critical of the administrations plan to help it’s staffers pay back bonuses by cutting them checks in the amount of the bonuses that the employees will then sign over back to the government.

Guam – Vice-Speaker B.J. Cruz is disappointed that the Attorney General is not pursuing any sort of criminal case for the illegal expenditure of bonuses that were given to Governor’s office employees and he says that the administrations proposed fix which involves a sort of check exchange is not the right way to resolve the issue.

“I’m glad she did something I am disappointed with the fact that she was very good about finding a resolution for her client the Governor by suggesting that the legislature do something to legitimize what she herself in her opinion says was an illegal expenditure so she took care of that client my question is when are you going to address your other clients the thousands of people who voted you into the office who expect that you’re going to do some kind of criminal action or that they’re not going to be paying this twice?” asked the Vice-Speaker.

Cruz is referring to Attorney General Elizabeth Barret-Andersen’s recent opinion that the bonuses paid out to Governor’s staffers was illegal. The A.G. says this money must be paid back.

However the Governor’s office is essentially going to help their staffers pay back the bonuses by cutting them a check for the amount they owe and then having them sign that check back over to the government. “As I understand it the check exchange was this morning,” said Cruz adding, “Let me make it something that most people can understand. Some of us may have gotten at some point some help from our parents maybe $25 thousand dollars to assist us in making the down payment for the house. Five years have passed and we have not payed mother back. Your sisters are complaining how come only he got $25 thousand dollars for his house so mother decides oh I’ll write a check to you for $25 thousand for your 40th birthday you sign the check back to me and so I can tell your sisters you payed back the $25 thousand. Yes mother but you gave him the $25 thousand to pay you back. How is that not costing your mother double?”

Vice-Speaker Cruz says he would like to see the Attorney General address the violation of the certifying officer law and he would like to find out who authorized these illegal expenditures.