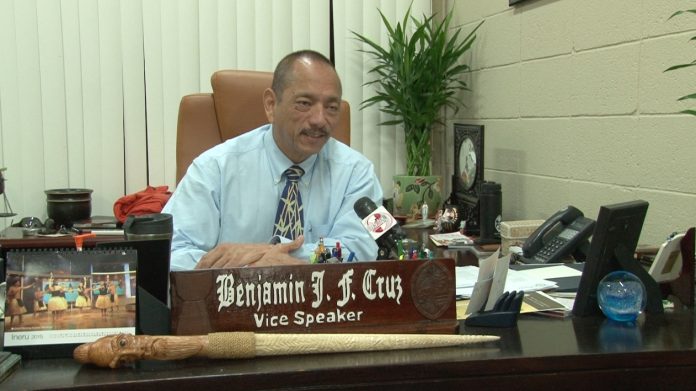 Vice Speaker Cruz will hold roundtable discussions at the request of the Public Auditor who was not on Island for the public hearings last week.

Guam –  With the public hearing now over, Vice speaker B.J. Cruz says the next step for his hybrid retirement plan is to hold roundtable discussions, at the request of the public auditor, to hopefully have the bill ready to go before next year’s budget hearing.

You could call it Vice Speaker Cruz’s hybrid retirement plan round two. After a failed attempt last year, Vice Speaker Cruz tried again, but this time around he says people packed the public hearing room, a change from last year. The problem, according to Cruz, is that when Gov Guam employees who have the defined contributions plan retire, they will be broke in a year or two because the DC plan doesn’t have a “floor’. The hybrid retirement plan however will push Gov Guam employees as well as the government to contribute more to their retirement. This, according to Cruz, should sustain retirees longer than a year or two.

“I know a couple of guys in the audience that were in their 60’s and they’re gonna have to put in another ten years before they can retire. They want to know [if] there is going to be something to protect them, so they can have a floor or some sort of guaranteed income for the rest of their lives,” said Cruz.

Cruz says the plan will guarantee a Gov Guam employee a set monthly plan for the rest of their lives. Right now under the defined contributions plan, most people have $60,000 to $80,000 in their account according to Cruz. He also says the hybrid plan must be cost neutral. The plan must balance the amount the Gov Guam employees pay versus the amount the government pays—an amount that will be taxpayer funded.

He says the employee contributions under the hybrid plan would be 1.75 percent of their annual salary for however long you work. Under the plan, Gov Guam contributions will go up. Some of the criticisms came from the firemen and police. Under the old plan, public safety employees could retire at 55 or 30 years of service, whichever came first. Under the hybrid plan, there is no current provision. Cruz says he will address this concern with the retirement fund board. As for the social security legislation presented by congresswomen Madeline Bordallo and senator Mike San Nicolas earlier this year, Cruz says since the legislation hasn’t been passed by congress he does not know how it will fit into the hybrid plan.

“At the testimony last week, it was testified that trying to include an increase in the government contribution and trying to address some of the social security issues could cost the government an additional 3 percent which would come up to about $15 million in our contribution, government Guam’s contributions to the retirement fund and I don’t know if we could afford that,” said Cruz.

If you would like to see the different contribution rates proposed in the hybrid plan, visit senatorbjcruz.com or ofbguam.org.