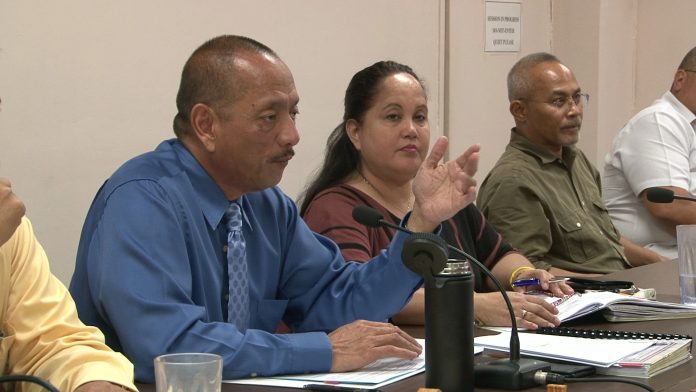 Guam – Things were pretty heated at GMH’s budget hearing today at the Legislature as Vice Speaker BJ Cruz criticized hospital administrators for not being more precise about how they plan to fill the huge gap between their operating revenues and expenditures.

The Guam Memorial Hospital is asking for $132 million in their Fiscal Year 2016 budget request. In it, GMH administrators have projected revenues to be at $115 million with their expenditures at $132 million, leaving a wide gap of $17 million.

While GMH says they have identified back up measures to make up for that gap, Vice Speaker BJ Cruz, Oversight Chairman on the Finance Committee, slammed GMH for counting on measures that may not pan out.

One of those measures is for the Legislature to include an administrative provision that would give GMH the complete authority to raise their rates and fees at any given time without having to get approval from the Legislature first.

“And you’ve written a budget that includes a gap of $17 million and in it you assumed that you would be able to have this authority–authority that you’ve not written nor requested yet before today. Is that right?” Cruz asked.

GMH CFO Benita Manglona responded to him saying another project they are working on is getting CMS approval to adjust the hospital’s reimbursement rates through TEFRA rebasing. If approved, the hospital could collect up to $18 million in Medicare reimbursements.

“There’s other ways that we thought that maybe this would fund the additional the gap there and it’s the TEFRA adjustment, the TEFRA rebasing, the adjustment request that we’re working on,” said Manglona.

When Cruz asked whether that’s ever been achieved in the past, GMH CEO Ted Lewis said the hospital has made significant progress in getting the CMS approval.

“So administratively they have some additional review but we very confidently anticipate that that is going to be approved in the next three months,” Lewis noted.

“Anybody? Because my Google search and Google scholar search didn’t pull one up,” he lamented.