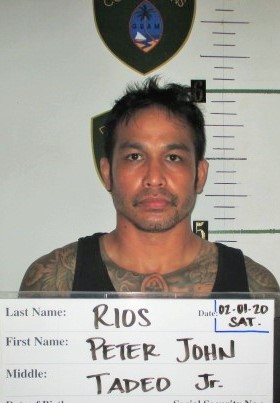 The man found dead in Mongmong Monday morning has been identified by a family member as 45-year-old Peter John Tadeo Rios Jr.

The family member declined to be identified but confirmed that Rios was the victim of a shooting.

Rios was found inside an apartment at Taitano Apartments on JA Camacho street in Mongmong shortly after 7 a.m. Monday morning.

MTM Mayor Rudy Paco told PNC News Monday that he was told the man was shot.

Neighbors reported hearing two loud bangs. Among them Teresita Villanueva who said the sound of the gunshots caused her to jump out of bed and go outside her apartment unit which is directly below the apartment Rios was found dead in.

Villanueva said she saw a woman frantically running from the apartment and down the street moments after the shooting.

GPD spokesman Sgt. Paul Tapao has said that the case has been classified as a death investigation. He said an autopsy must be conducted to determine the cause and manner of Rios’ death.

Rios has lived a checkered life He was arrested twice in February after two women filed reports accusing him of hitting them. The charges against him included family violence and interference with reporting.