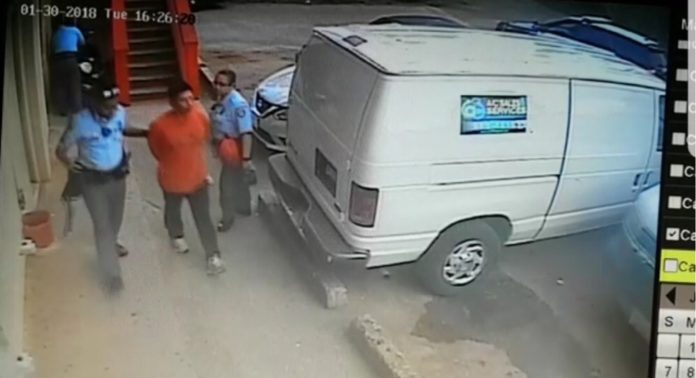 Guam – Police say a man is behind bars after he devised a scheme to swindle unsuspecting motorists by posing as a good Samaritan offering his help to “fix” their vehicles.

But it appears Christopher Megofna Manglona’s alleged scheme has run out of gas and he is now in the custody of law enforcement.

Imagine pulling into a parking lot and as you are exiting your vehicle and a seemingly concerned individual approaches you, claiming that he saw sparks coming from the engine of your vehicle. Well that was the event that unfolded for Jannie Devera who shared her story with PNC about how she nearly fell victim to the suspect’s scheme.

“It happened on the 20th, early morning or late night like 1:30 in the morning. I was at American Grocery. I parked my car on the Pizza Hut side of the parking lot and a person told me he saw smoke underneath my car, might have been sparks too. Due to the fact that my car does have some problems, so I was like, uh-oh something is happening with my car. So I was really concerned and he said I should either call someone, leave my car there or check it out right away because it is very dangerous,” shared Devera of her encounter.

Not knowing what to do and after carrying on a conversation with the male individual, she admits that he convinced her and that she bought into allowing him to check under the hood.

“I opened up the hood, he told me to go into the car and gas it and hear it. I did what he asked and started hearing my engine rattling furiously. And he said, ‘See, you shouldn’t be driving this,’” explained Devera.

He continued to try to persuade her into allowing him to “fix ” the car, even offering to call her family to explain the problem.

That’s when Devera became suspicious and realized that she could be falling victim to a scam. She left American Grocery and proceeded home. The following day as she was driving, her vehicle’s problems seemed worse. She says that her husband took at look at  her vehicle and discovered the the airflow intake valve had been tampered with.

But Devera was not the only person who the man tried to swindle. In another incident, police say his MO was the same but this time he was able to get money out of his victim.

According to court documents, the scam took place in the parking lot of Mega Drug Store where the alleged scammer was identified through surveillance footage as Christopher Megofna Manglona.

Manglona allegedly “fixed” another person’s car and demanded payment of $100, but the victim refused to pay as he believe he was getting scammed. Court documents state that becasue Manglona was adamant in being paid, the victim called a relative who then paid Manglona $20.

The victim then went into Mega Drugs Store and informed the employees what had occurred. The victim told police that’s when he found out that Manglona had done the same thing to another individual and that Facebook posts were being share by users to warn others of the scam.

Through surveillance footage, local authorities were able to identify the moped driven by Manglonia and located him. Police say that he admitted to asking for money, however he was unable to provide an explanation regarding what the problem was with the vehicle he allegedly fixed.

Court documents state that Manglona has had previous run-ins with the law as he is currently on pretrial release in a separate case.

In this recent case, Manglona is charged with possession of a schedule two controlled substance, commission of a felony while on felony release and attempted theft by deception.