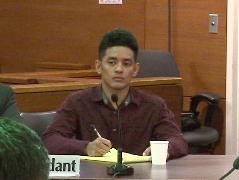 Jury trial is ongoing for 24-year-old Derrick Techur, who is accused of criminal sexual conduct against three girls in Nov. 2012.

Techur was arrested for sexually assaulting three girls, who were minors at the time, separately and in the span of one day. The victims were able to testify that he went into one of the girls’ bedroom through a window that was usually left open.

Techur’s trial will continue next week before Judge Anita Sukola.