Guam – Acting Governor Ray Tenorio this morning signed the final agreement that will place $172 million dollars in borrowed bond funds in the hands of the Guam Waterworks Authority to carry out badly needed repairs to the island’s aging water and sewer systems.

This is the first of 3 bond offerings that GWA must float in the next 4 years in order to satisfy the demands of a federal court order requiring improvements that will bring GWA into full compliance with the Clean Water Act.

All 3 bonds will add up to $495 million in borrowing which, in turn, has required an increase in water rates to pay back the borrowed funds.

The PUC has already approved a 57% increase in water rates over the next 5 years to pay for that debt. But CCU Chairman Simon Sanchez said that because the bond fetched a lower interest rate than expected, only 5.6%,  GWA will petition the PUC for a decrease in the rate hike they have already approved.

Acting Governor Ray Tenorio said, “It’s going to be about $1 increase for half of the total users in residential areas and just over a $1 to the other half of the residential users. That’s a nominal amount almost everyone can pay. We’re talking about a huge invest on capital which means more jobs, more ecenomy growth, more taxes, more infrstructure, and this means a better island.”

CCU Chairman Simon Sanchez said, “The most important people in all this process though are the rate payers of Guam. Every month, they sacrifice to pay their water bill and provide the money necessary to operate the system, invest in the future, build the things we need to build. They own the system, they pay for the system and tonight we get a $170 million of their money that they’re going to invest into the system. It’s not easy writing those bills. They have gone up in the last decade, they will go up a little more in the rest of this decade but we’ll end up with a system we can rely on.”

Acting Governor Ray Tenorio thanked the “many people who were pivotal in accomplishing what is a milestone for the Guam Waterworks Authority and the ability to go to the market and sell bonds at an excellent rate for the people of Guam.”

He continued, “What you did not see are the hundred of people working for many many years. Many of them for their entire lives. Most of them in the recent years, to improve the efficiency and effectiveness of the GWA. The work that they’ve done have not only improved the ability and integrity of the institution but they made it possible for the people of Guam a very nominal increase in the residential rates…to be able to invest in their own island, to be able to invest in capital, which will bring our island to full compliance with the obligations we have to our citizens, to ensure that the water that they get whether it be from tap or from wells that we drill are going to be quality. We don’t have to worry about their quality of life as a consequence.”

A release from Adelup quotes Governor Calvo as saying:

“We’ve all seen what happens when government doesn’t maintain the water and wastewater systems. GovGuam put people’s lives at risk when the water was contaminated with sewage over a decade ago. These bonds will help us make sure yesterday’s water catastrophes don’t become more expensive problems our children will have to endure.” 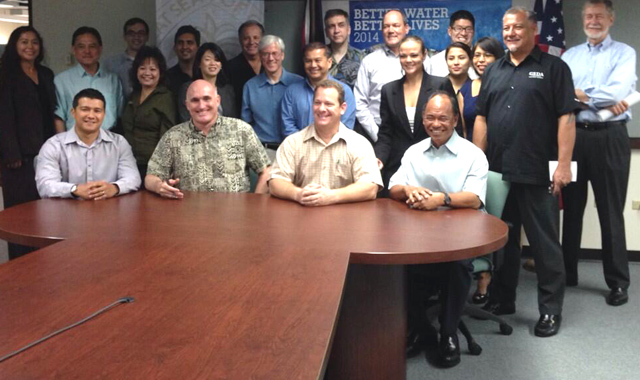 “We’ve all seen what happens when government doesn’t maintain the water and wastewater systems. GovGuam put people’s lives at risk when the water was contaminated with sewage over a decade ago. These bonds will help us make sure yesterday’s water catastrophes don’t become more expensive problems our children will have to endure.” – Governor Eddie Baza Calvo

GWA Bonds to Modernize Water & Sewer Systems
Over the next seven years, GWA will be replacing leaking pipes, improving water pressure, repairing or rebuilding all its water storage tanks, drilling new water wells, and upgrading wastewater treatment in the South. Almost a half billion dollars will be invested into our water and sewer systems to build a sustainable modern system for future generations. It’s the latest in a series of upgrades GWA is making so it never returns to the days of ‘hanom taki.’ All of this is possible starting with a $172 million bond was signed for the Guam Waterworks Authority by Acting Governor Ray Tenorio today. This is the first of three bonds, totaling up to $495 Million slated for GWA over the next four years.

Administration looking to prevent receivership, substandard water services
It was only a decade ago when Guamanians had to boil water for hundreds of days because of the presence of e.coli in the water. This was the result of poor decisions and the failure to invest in modernizing the water system. U.S. EPA even pursued court action against GovGuam, resulting in federal court order to rebuild GWA’s systems. Leaders since that time have worked hard to fix these problems, oftentimes making tough decisions in the interests of ratepayers. Administration officials are taking every possible course of action to ensure GWA has the resources necessary to keep Guam’s water and wastewater infrastructure stable for the growing local community.

“We simply cannot afford to go back to the days of ‘hanom taki.’ Modernizing the water and wastewater systems isn’t a choice – it’s a responsibility we will take seriously.” Acting Governor Tenorio said.