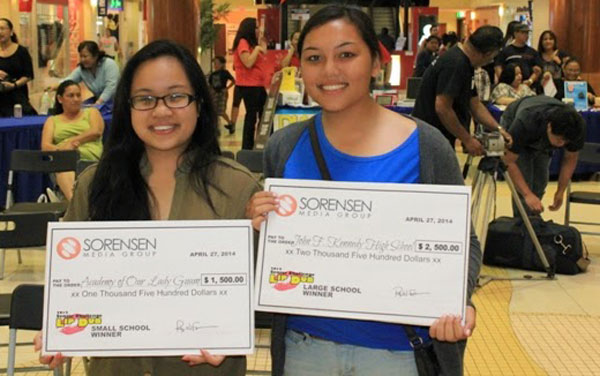 Hagatna, Guam – The Sorensen Media Group along with its sponsors announced the winners of  the 2014 Senior Lip Dub Challenge this past Sunday April 27 at the awards ceremony held at The Agana Shopping Center.

John F. Kennedy High School was announced the winner of the large school category taking $ 2,500 back to their school along with bragging rights.

Academy of Our Lady Guam also won the competition for the small school category taking the $ 1,500 prize.

Although there were only two winners, there was still a great show of support from every participating school at the awards ceremony. Students from Southern High School, Saint Paul Christian School and George Washington High School were present and gave great feedback on this event made possible by the Sorensen Media Group and its sponsors.

“I love how the Lip Dub Challenge allowed our school to showcase our school spirit and student talent,” says Bryant Santos, JFK’s Senior Class Vice President. All hard work paid off for John F. Kennedy High School as their school was announced as the large school winner. Yelling, screaming and tears of joy filled the center court at Agana Shopping Center as the announcement was made.

“The Senior Lip Dub Challenge is meant to be a fun and creative project for students. This is where students come together and help bring out each other’s uniqueness. At the end of their lip dub production, they will soon realize that they have takeaway bonuses such as class bonding and the sense of being apart of a team!”says Michelle Apiag Creative and Communications Coordinator for the Sorensen Media Group.

The Sorensen Media Group looks forward to next year’s Senior Lip Dub Challenge. Students have responded to the invitation for the past two years and have submitted great lip dub videos with obvious effort and hard work . It would come as no surprise if this year’s High School Junior classes are planning their lip dub project in advance for next year’s Lip Dub Challenge. 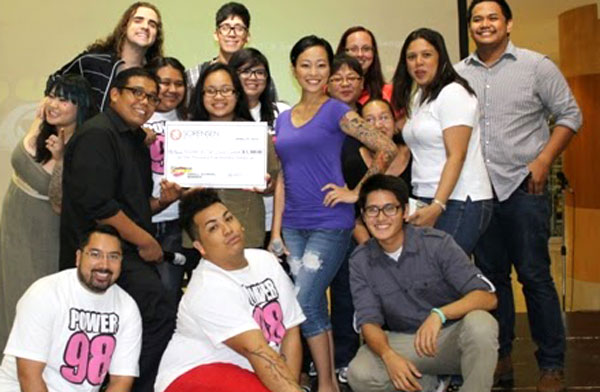 About Sorensen Media Group
Sorensen Media Group, a privately-held media and entertainment company, is the leading private broadcast company in the Western Pacific with holdings in television, radio and Internet programming, development, production and broadcasting. It’s stations include Power 98, Newstalk K57, 105The Kat