Guam – Guam Homeland Security and the Office of Civil Defense [GHS/OCD] has given the “All Clear” after an inspection of a “suspicious package” found it was not a threat.

The Adelup complex was evacuated about Noon, but following a security inspection, GHS/OCD Spokeswoman Alyssa Benito said in a texted message that “Apparently, it was just paper inside” the package.

However the threat was considered serious enough for the Navy’s Emergency Ordinance Disposal team to be called in and they deployed a robot to inspect the package.

Benito explained that the threat was considered serious because authorities were acting on “intelligence” received by  GPD’s Executive Security Division that similar packages had been sent to the offices of other Governor’s stateside.

She could not describe the package because she had not seen it, but she said its one distinguishing characteristic, similar to the packages sent to stateside Governor, is that the address was the same as the rerun address. In other words the package was addressed to Governor Calvo and it said it was also sent by Governor Calvo.

The mail carrier became suspicious, contacted authorities and that touched off the evacuation.

She could not say how many Governors had received similar packages or what was found in them. 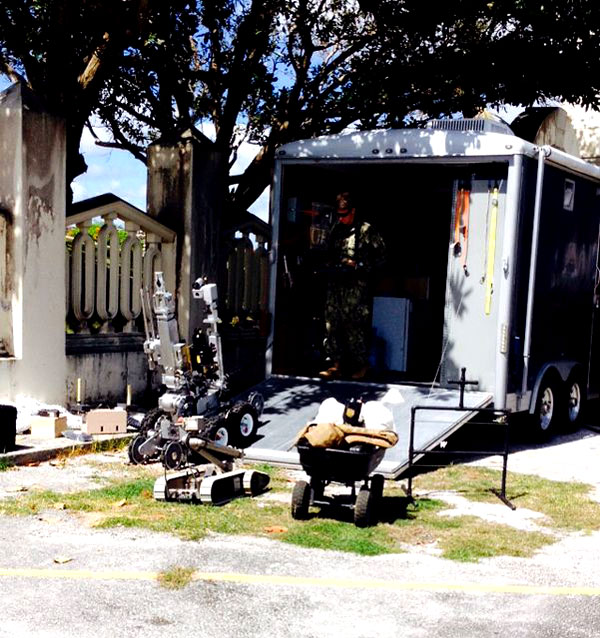 The Governor’s Central Files office reported a suspicious package received this morning. Police and Civil Defense officials are investigating. EOD officials will be scanning the package using X-ray to clear the package.

Civil Defense has evacuated the Governor’s Office while this is happening. We ask for the public’s patience as the area is cleared for safety.