Guam- 18 year old Alixes Scott will now go on to represent the island in Moscow, Russia this November after she earned the title of 2013 Miss Universe Guam yesterday night [Monday].

About 500 people filled the Hyatt Resort ballroom as family, friends and supporters cheered on the ten contestants that competed in the Miss Universe Guam pageant. They were also treated to entertainment from the Lil’ Giants.

But in the end, Scott beat out the other “Women of Purpose” to become the new Miss Universe Guam. The Tumon resident also won the awards for Best Swim Wear and Best Evening Gown.

Standing at 5’8” tall, she says she was born in Hawaii, but has lived on Guam since she was a year old. The Academy of Our Lady graduate also says she is currently a full time University of Guam student. While she is new to the Miss Universe world, Scott remains excited for what’s ahead.

“Right now I want to help inspire kids to live their dream cause this was just a dream to me at first,” said Scott. “I experienced it and I ended up winning. So I want to let everyone out there know that no matter how big your dream is, you can always make it. Just try hard.”

National Director Joyce Bamba says they have three weeks to get Scott prepared for the Miss Universe Pageant in Russia. She mentions their team of experts has extensive training in store for Scott, and Veskler as well, to ensure they are ready to best represent Guam.

“[Alixes is] beautiful already,” said Bamba. “We want to bring all of her character, her self-esteem, coupled with what she knows about world knowledge, what’s happening in the world today and how she can be a blessing to others.”

In the meantime, Scott will continue to commit to the number of services the Miss Universe Organization provides to the local and international community. She and Bamba thank everyone for their support.

“I just want to thank all my sponsors,” said Scott. “I want to thank Joyce and my parents especially. I couldn’t have done it without any of you, especially the other girls. Throughout this journey, I got to meet a lot of amazing ladies and without them, I wouldn’t have been on stage last night performing the way I did.”

“It’s all a labor of love and we just appreciate all of them and our sponsors as well,” said Bamba.

The Miss Universe Guam and Miss International Guam pageant is sponsored by the Guam Beauty Organization. This umbrella organization was founded by the late Senators George and Cecilia Bamba over 40 years ago.

The live recording of the 2013 Miss Universe Guam Pageant will air at a later date on the stations of the Sorensen Media Group. 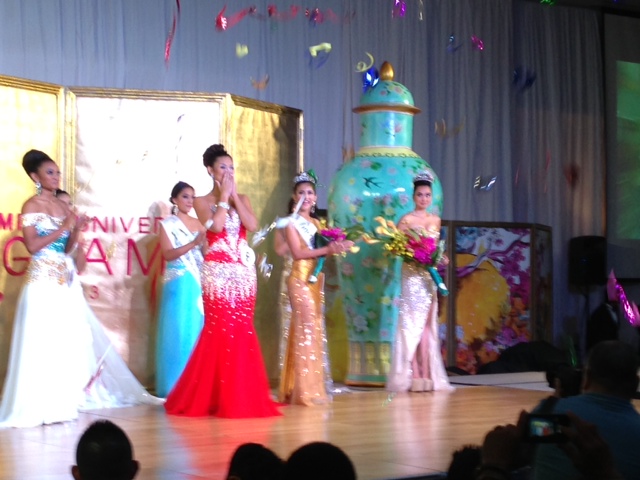