Guam – Deputy Guam DOE Superintendent Robert Malay is urging anyone with information about who made the bogus bomb threats at two schools this morning to contact authorities “So we can put an end to this kind of behavior.”

The calls were made to 911 this morning, about 14 minutes apart.  GFD Spokesman Lt. Ed Artero says the first threat was made to Wettengel at 7:35am. Soon after, at 7:49am, a second call was made threatening a bomb at Okkodo High School.

Classes were disrupted at both schools as students and staff were forced to evacuate the buildings while Guam Police and Fire swept both campuses.

HEAR Patti Arroyo’s interview about the ALL CLEAR with Guam DOE Deputy Superintendent Rob Malay below:

K-9 units swept both schools and found nothing. The all clear was sound at about 9:30am.

Malay urges anyone who knows anything about the fake calls to contact Guam Police or call Guam Crime Stoppers at 477-HELP. 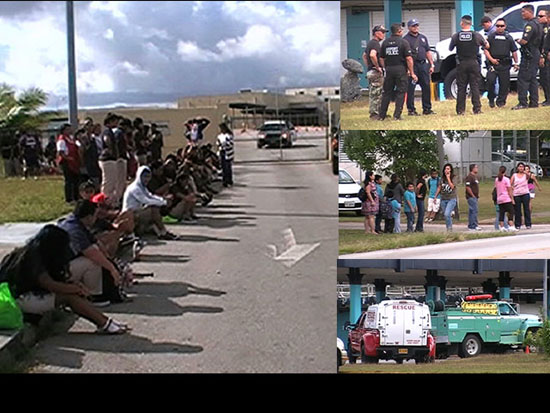