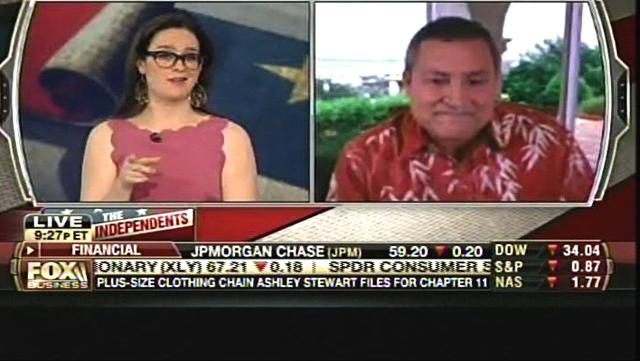 The segment began with a graphic reading “Guam Economic Rally”. It highlighted GovGuam’s $30.1 million dollar surplus at the end of 2012, after starting 2011 with a $336 million dollar deficit.

Speaking via Skype, the Governor told program host Lisa Kennedy Montgomery that the transition from deficit to surplus was a “gargantuan task” which he compared to a patient in critical condition and the surgeons had to stop the bleeding.

“We stopped the bleeding by … simple rules that came out from guys like Ronald Regan and Margaret Thatcher .. you cut spending.”

“People are comparing your success, with Puerto Rico’s recent struggles”, said Montgomery. “What sets you apart?, because they are bleeding in Puerto Rico.” she asked.

The bulk of the $336 million dollar deficit was converted into long term debt through the sale of bonds.