This afternoon,  Campos appeared in Superior Court in connection with the Maiti robbery only. He was charged with 1 count of  Second Degree Robbery and a Special Allegation of Possession and Use of a Deadly Weapon in the Commission of a Felony. Bail was set at $100-thousand dollar cash. Campos remains in jail.

READ the Magistrate complaint against Campos HERE [5th one down]

In both the Maite and Sinajana robberies, shots were fired.

In the Sinajana case, 5 employees were walking out of the Payless when 3 masked men approached them in the parking lot. One of the suspects fired off three shots into the air and the robbers made off with the handbags of two employees.

Last Friday evening, the suspect fired one shot into the counter before fleeing with about 40-dollars.

The Sinajana robbery took place shortly after 1am in the parking lot in front of the Payless.

3 men held up 5 employees.  All 3 suspects had black shirts covering their faces.  One of the suspects had a silver handgun and fired 3 shots in the air and demanded the cashier’s and manager’s handbags.

After getting the handbags, they fled on foot around the Payless and into a housing area behind the store.

During the Route 8 Mini Mart robbery a man entering the store about 7:45pm last Friday evening.

The man was armed with a hand gun and wearing something that covered his forehead and chin.  He demand money from the cashier and fired one shot from the hand gun into the counter.

The cashier ducked for cover, the suspect grabbed about $40-dollars from the register and fled.

[The photo below is from a wanted poster created by the Route 8 Mini Mart owners and posted on their front door.] 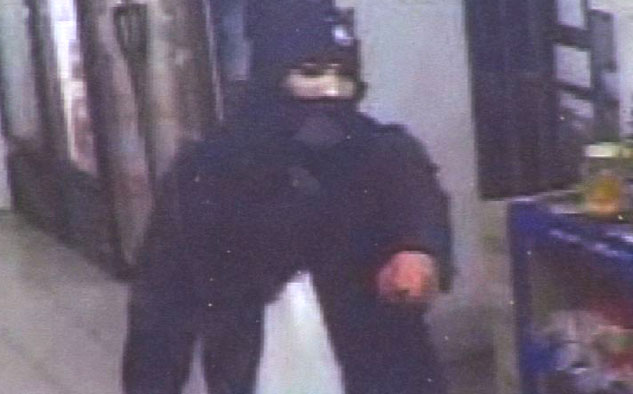