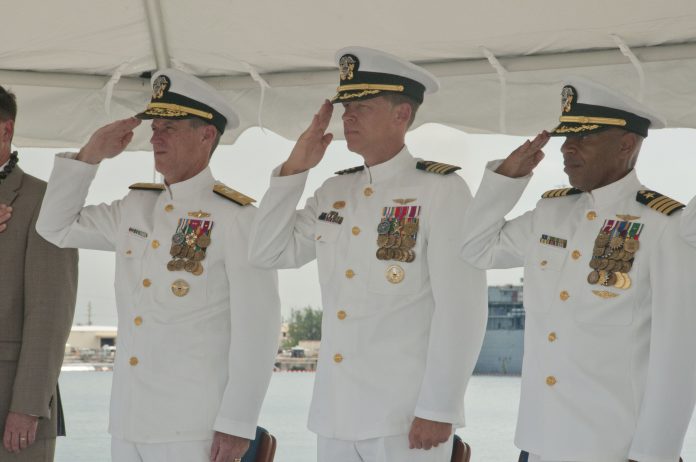 During the Change of Command ceremony this morning, Joint Region Marianas Commander Real Admiral Tilghman Payne presented an award to outgoing Captain John Ward, who served as Commanding Officer of Naval Base Guam for the past two years.

During his speech, Captain ward thanked his staff. He said he is blessed to have experienced the culture of Guam and that he has never seen a place with so much patriotism. He said, “What I’ve learned most is Guam’s patriotism, rich history and culture, and focus on cooperation and team building. For the past 24 months, I’ve been proud serving in this beautiful island with my family. I’ve been fortunate to meet true Americans. I’ve been in the mainland and visited many places in the world, yet I’ve never seen a place that gives the true meaning of patriotism like Guam. More than 16000 veterans in Guam its no wonder”

As he turns over the command to Captain Anderson, Ward said he is confident that this new leader will take Naval Base Guam to the next level.

Anderson is reporting to Guam after serving as Executive Assistant at Navy Recruiting Command in Millington, Tennessee. Meanwhile, Ward will report to U.S. Naval Forces Europe-Africa in Naples, Italy.