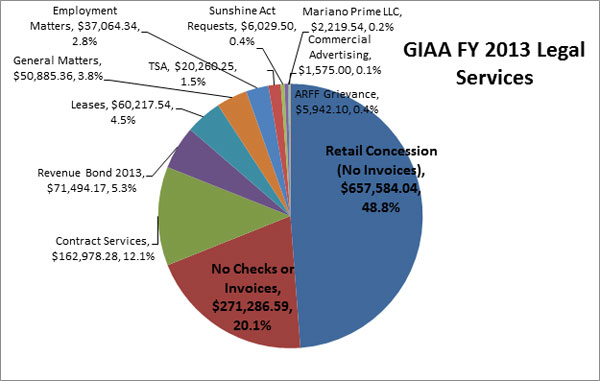 Guam – (Oct. 24) – Following receipt and meticulous accounting of hundreds of pages of scanned billings, checks, and invoices for legal services at the Airport, Vice Speaker Benjamin J.F. Cruz continues his probe to account for $1.3 million in payments for legal services rendered by the Guam International Airport Authority in FY 2013.

In a Freedom of Information Act request that that was delivered to GIAA Executive Manager Charles H. Ada II earlier this afternoon, Cruz writes that the Airport’s last FOIA response, received October 21, 2013, was incomplete.

The documents, which were sent in response to a September 27 FOIA letter, should have included, among other requested information, all billing statements and all checks for bills paid pursuant to the legal service agreement between GIAA and the law firm of Calvo, Fisher & Jacob.

However, the documents provided by GIAA only accounted for 37 percent of the hours of legal work billed and only 32 percent of all costs for legal services for GIAA in FY 2013 as indicated in the previous FOIA response.

“While your original FOIA response dated September 23, 2013, indicates that [GIAA] paid approximately $1.3 million for 6,317 hours of legal work in FY13,” Cruz said in the letter, “this most recent FOIA response only provided copies of billings, checks and invoices that accounted for 2,320 hours and $418,666.08.” 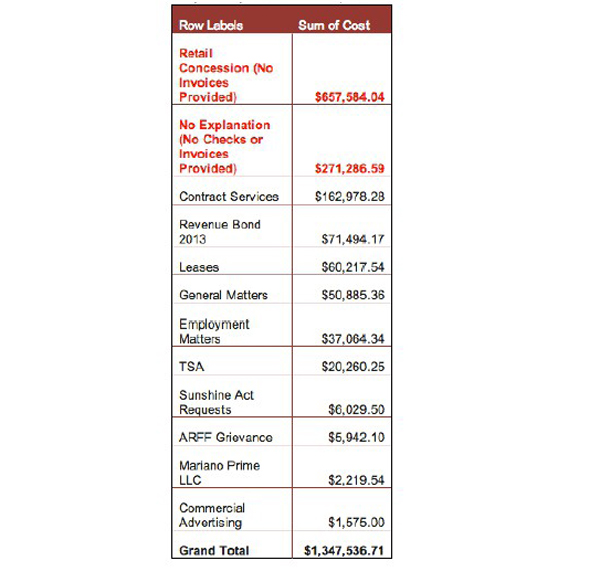 Cruz also noted that the October 21 response did not provide accompanying invoices for four checks totaling $657,584.04 for legal services related to retail concessions that were performed during the months of April, May, June, and August of this year.

“$800,000 just doesn’t disappear; GIAA’s own records show $1.3 million was paid in legal fess but they can only account for 400,000,” said Cruz. “My experience tells me when something feels wrong, it likely is wrong, and I want to know why.” 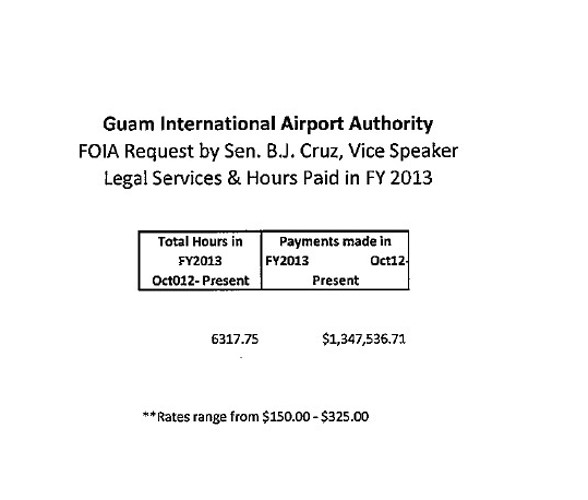 Re: Freedom of Information Act Request (Provision of Incomplete Documentation)

Thank you for your prompt response to my most recent Freedom of Information Act request. However, I am still in need of records that have been lawfully requested but not provided.

After a review of all records provided to me by the Guam International Airport Authority on October 21, 2013, I am left with unanswered questions. While your original FOIA response dated September 23, 2013, indicates that it paid approximately $1.3 million for 6,317 hours of legal work in FY13, this most recent FOIA response only provided copies of billings, checks and invoices that accounted for 2,320 hours and
$418,666.08.

Additionally, the last response did not provide accompanying invoices for four checks totaling $657,584.04 for Retail Concession-related legal services performed during the months of April, May, June, and August of 2013.

As such, I am forced to reiterate my request. I know you will extend the same courtesy and professionalism as you have with our previous requests.

Pursuant to the authority granted by § 10103 of Chapter 10 of Division 1 of Title 5 of the Guam Code Annotated, the “Freedom of Information Act”, I hereby request a copy of the following public record(s):

1. All checks, bank transfers, and/or payments in any form, equating to a cumulative $1.3 million in payments, as indicated by GIAA’s FOIA response dated September 23, 2013, appended hereto.

2. All legal billings and/or invoices equating to a cumulative 6,317 hours in legal work as indicated by GIAA’s prior FOIA response dated September 23, 2013, appended hereto.

The information requested above may be submitted via electronic mail to senator@senatorbjcruz.com or carlo.branch@senatorbjcruz.com. You may also contact my office at 477-2520 for assistance.

Thank you for your time and consideration. I look forward to your timely response.