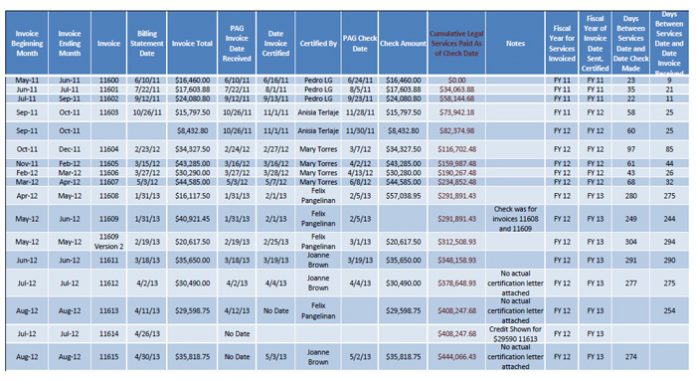 Guam – Vice Speaker B.J. Cruz is raising concerns over what he feels to be discrepancies in billings from the Port of Guam’s law firm, Philips & Bordallo.

Senator Cruz says there are “substantial differences between the total amounts for the checks issued by PAG versus the sums cited in the independent audit” done by Deloitte & Touche.

The Vice Speaker has sent a letter to Port General Manager Joanne Brown calling on her to explain what he feels are these “serious anomalies within its records and the subsequent disparities between PAG figures and the numbers from an independent audit.”

Port Board Chairman Dan Tydignco told PNC News that he appreciates and shares the Vice Speaker’s concerns about the cost of legal services at the Port and Port managment will respond to the Senator’s letter.

However Tydingco noted that legal expenses have fallen dramatically since Philips and Bordallo became the Port’s legal counsel. Legal fees reached a high of $750-thousand 3 years ago, he said, and they have dropped significantly since.

But Tydingco acknowledged that this past year has seen higher legal fees because of a series of high profile issues involving Port personnel and contracts.

Because of that, legal expenses were expected to exceed the $500-thousand dollar annually cap that was in the original agreement with Philips & Bordallo. As a result the Port amended that contract in April by lifting the cap for the duration of the current contract. He said that was done under the supervision of, and co-signed by the Attorney General Lenny Rapadas.

Payment Made to Second Law Firm by Previous Port Management:

The previous Port Manager was Mary Torres who was fired by the Port Board last December.

Tydingco did not name the previous Port Manger and he said it is not clear what the payment was for.  He declined to provide further details saying the matter is still being looked into.

Meanwhile, in response to this report, former Port Manager Mary Torres contacted PNC news to point out that she never authorized any payment to a second law firm for services rendered while the Port had a contract with Philips & Bordallo.

Torres said that when she took over at the Port in February of 2012 there was an outstanding invoice for services that were performed in January of 2011 by the Lujan & Aguigui law firm under the previous contract, before Philips & Bordallo became legal counsel to the Port.

Torres said that bill was for “approximately $600 dollars for services rendered at a time when Philips & Bordallo were not legal counsel to the Port.” She  authorized the payment of that old bill.

“I did not engage another law firm,” said Torres and any suggestion that I did is “ludicrous.”

READ the release from Senator Cruz below:

(July 25th, 2013 – Hagåtña) As the Government of Guam budget season approaches, Vice Speaker Benjamin J.F. Cruz continues his probe into discrepancies regarding the invoicing and payment for legal services rendered by the law firm of Philips & Bordallo to the Port Authority of Guam (PAG).

Following the fulfillment of a Freedom of Information Act request regarding the legal services contract between Philips & Bordallo and PAG that gleaned 21 invoices, 19 invoice certifications, and 18 checks from PAG’s 400-page response, Cruz has called on the Port to explain serious anomalies within its records and the subsequent disparities between PAG figures and the numbers from an independent audit performed by Deloitte & Touche.

“I am forced to ask if PAG has additional legal counsel,” Cruz writes in a letter to PAG General Manager Joanne Brown regarding the substantial differences between the total amounts for the checks issued by PAG versus the sums cited in the independent audit. “Absent that scenario, the available explanations for the disparities listed above are few and far between.” PAG has been asked to provide contracts and invoices if additional counsel had been employed.

Cruz also expressed concern over the irregularities in billing trends.  Specifically, Cruz has requested an explanation for why a large sum of $270,965, or 62% of the total billing amount for payments for services rendered during fiscal year 2012, was invoiced and paid for after January 31, 2013.

“How was PAG able to close its FY2012 ledgers with over $270,000 in additional legal fees not submitted or paid?” Cruz writes in his letter.  “Why didn’t the previous General Manager (Mary Torres) receive invoices for 62% of the billing amount for legal services when she was at the Port for all of FY2012?”

He also asked why seven invoices, which add up to $280,822, were submitted an average of nine months following their service dates, when previously the average period between service dates and invoice submissions was less than one month.

Additional documents regarding PAG’s budgets for fiscal years 2011, 2012, and 2013, including copies of the Port’s legal services ledger for the years in question, have also been requested to assist Cruz’s investigation as he continues to review PAG costs associated with legal services.

The referenced documents are attached. For more information, call 477-2520