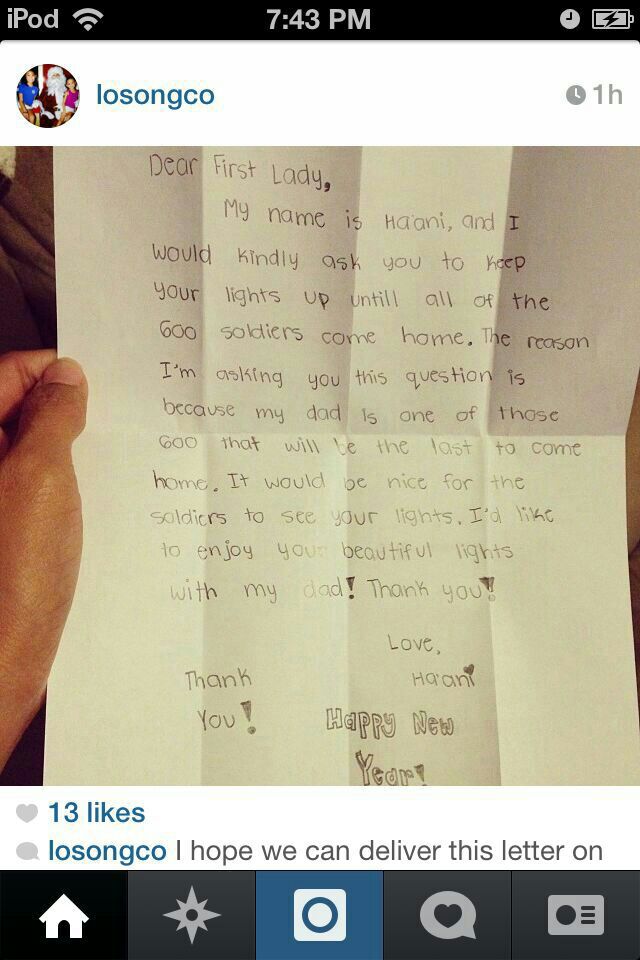 Guam – The Christmas lights at the governor’s house will stay up until all 600 soldiers are home thanks to 10-year-old Ha’ani Losongco.

Ha’ani’s father is among the soldiers still in Camp Shelby, Mississippi waiting to return to Guam. Ha’ani says Christmas just wouldn’t be the same without her annual trip to see the lights with her father. So she wrote a letter to First Lady Christine Calvo asking that the lights stay up until all Task Force Guam members are home.

Every Christmas season, Ha’ani and her father, Josh Losongco visit the Skinner’s Plaza to see the Christmas lights. This year was quite different. The Guma I Taotao Peace Festival was moved to the government house, but it’s also the first year that Ha’ani’s dad is not home during the holidays.

The lights were scheduled to go down this past Saturday. Ha’ani knew Christmas would not be complete without her family’s annual trip to see the lights.

“I went to the governor’s house with my nino and I was looking at it and I thought it wouldn’t be the same without my dad because I usually go with him to Skinner’s Plaza but since it’s at the governor’s house and I haven’t enjoyed the lights with him I thought maybe I should write this letter and ask them to keep it up until he comes home,” explains Ha’ani.

First Lady Christine Calvo agreed. She wrote back to Ha’ani telling her, “Please give your Dad a big hug from us and bring him to the Government house to enjoy the lights with you and your family.”

The First Lady says the lights will stay up until all 600 soldiers are back on Guam. She also honored Ha’ani during a ceremony at the government house last night where she thanked her for her brilliant idea.

Ha’ani tells us about the special bond she has with her father and what Christmas day was like this year without him.

“It wasn’t the same as it is throughout the whole years, because we are very close, our bond is very strong and I usually spend Christmas with him opening presents,” she says.

We asked Ha’ani what she would tell her dad if he could watch her right now.

“Well I just want to let him know that I’m praying for him to come home safely and that I love him very much.”

Meanwhile, the second wave of Guam guardsmen and guardswomen should be making their way home within the next few days, says Guard Spokesperson Maj. Josephine Blas.

“If everything continues to go smoothly we’re looking at probably within the next seven days. We’re hoping by the weekend or maybe Monday at the latest,” Blas notes.

“The governor and the Adjutant General Maj. Gen. Benny Paulino, we came out just to see if everything’s going well and they wanted to let the soldiers know that although the first wave came in we haven’t forgotten them,” Blas says.

Once all the soldiers are back on island and have had a chance to get situated, Maj. Blas says a huge celebration party will be thrown in their honor. It will be a big event, she says, which will probably take place sometime in March or April.

Blas says there are about 250 Guam guard soldiers in Camp Shelby right now. She says a heroes’ welcome is also being planned for the next wave of soldiers coming home.