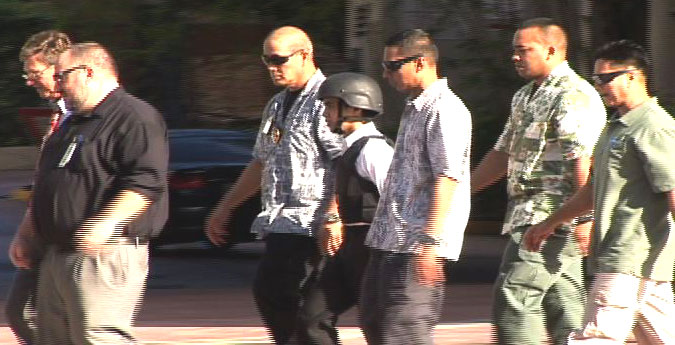 Guam – Chad De Soto, wearing a flack jacket and a helmet, returned to the scene of the crimes this morning.

Accompanied by his attorney, Public Defender Eric Miller,  and flanked by Court Marshals, De Soto held his hands behind his back and walked along the Tumon strip without expression.

They trailed behind the 12 jurors and 6 alternates who were led by a group of officials from the Attorney General’s Office and the Court, including Judge Anita Sukola, who is presiding over this trial.

Police blocked off 1 lane of  west bound traffic on San Vitores Road as they all strode, briskly, along the sidewalk from the Globe to the ABC store where the events of  February 12th, 2013 occurred.

Earlier this week, Judge Anita Sukola granted a motion filed by the prosecution to allow the jury to visit the scene where 3 Japanese tourists were killed, and 11 other people were injured.

De Soto is accused of driving his car along a crowded Tumon sidewalk, then crashing into the Outrigger’s ABC Store, then jumping out and stabbing people at random. He has entered a plea of not guilty by reason of mental illness.

At issue in the trial is not whether he did it. But whether he can be held legally responsible for his actions on that night.

The media was ordered not to take any pictures of the jury this morning and to stay behind them by 50-feet.

There will be no testimony in the courtroom today. Judge Sukola has scheduled an in-camera hearing to review medical records.