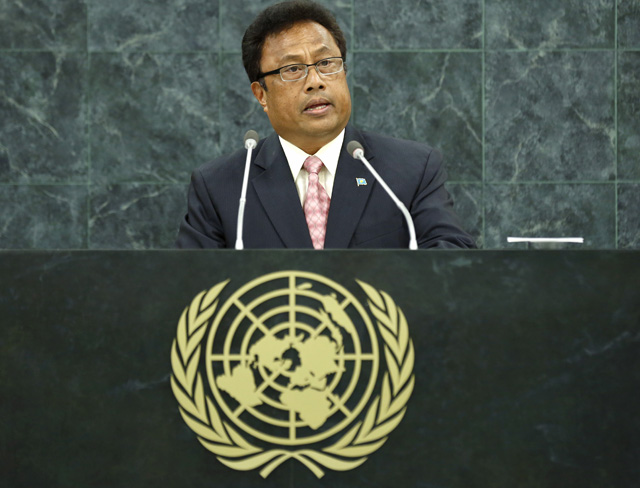 New York, NY (Feb 4) – At the United Nations earlier this month, Palau President Tommy Remengesau Jr. announced that his Pacific island country will ban all commercial fishing in its territorial waters, declaring some 200 miles around Palau a marine sanctuary.

“It makes every sense for our sustainability as island people and for our community,” said President Remengesau during a news conference at UN headquarters in New York.

Remengesau noted that over the past 20 years, small island developing states have experienced the damaging impact of climate change focusing on oceans would also help combat climate change.

“Twenty years ago we warned that we were the window of what would eventually happen to the rest of the world,” he said.

“There has been a tremendous amount of unpredictable weather. We have had all kinds of destructive forces to the islands, including sea level rise and ocean acidification. It’s everywhere.

“I have come to New York to say that the responsible way for us in the Pacific Islands is to have a really serious and sustainable approach to the oceans. We have no choice. It’s our way of life, our culture, our economy, our environment.”

Declaring Palau’s territorial waters into a marine sanctuary would not harm the country’s economy, Mr. Remengesau said, adding that the Pacific island would rely on the booming ecotourism industry which attracts hundreds of thousands of people to Palau every year.

Mr. Remengesau said he hoped other countries would join him in taking action to protect the oceans. “We are all connected somehow by what we do to the oceans and the seas, so it is important that the United Nations put emphasis on oceans in the next development goals.”

The eight anti-poverty targets known as the Millennium Development Goals will expire at the end of 2015, and countries are currently shaping what the new development agenda will look like.

Mr. Remengesau’s announcement was warmly received at the “Healthy Oceans and Seas: A Way Forward” high-level event, where he was a keynote speaker along with Andrea Orlando, the Italian Minister of Environment and Protection of the Land and Sea, and David Miliband, CEO of the International Rescue Committee.

Italy has partnered with a series of small island developing states to raise awareness of the importance of including ocean protection in the new development agenda.