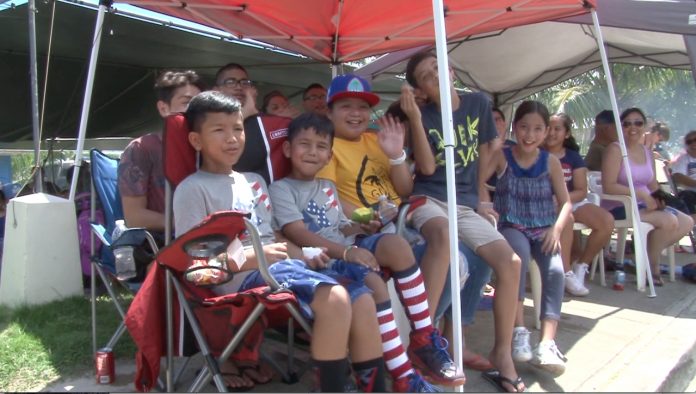 While we gave you a look at some of the families at the parade, lets check out the sights and sounds of the 72nd liberation parade.

Guam – The liberation parade brings out family pride for many Chamorro families. Now PNC brings you the sights and sounds of the families of liberation day.

It’s not just a time to celebrate Guam’s liberation; it’s a time to celebrate your family. Whether it’s familian Dero, familian Pereira or Quetu. Large groups of families gather to cheer on the variety of floats. Liberation is a time for families to come together. Daryl Leon Guerrero currently lives in Arizona, but this year, due to good timing, he is celebrating his first liberation parade in decades.

“First time back home in 18 years. My brothers and sisters we came out here to celebrate our parents 50th anniversary and the timing was right so we stayed for liberation,” said Leon Guerrero.

Leon Guerrero, familian Eto, was out celebrating the festivities with the typical barbecue, soda and beer. We asked him what liberation means to him.

“You know it’s a special day where we got liberated from the Japanese and kind of allowed us to have the lives that we live today. The military is very important to the island, the economy and I feel this is just kind of getting together and celebrating that time,” said Leon Guerrero.

But it’s not just for Chamorro families that celebrate this day. Active military like tony, who along with his wife and two kids made the trek down Marine Corps Dr. to celebrate liberation for the third year.

“For us, I like to see and support Guam for us to be able to give back too, I like to see everybody come together, you know for our freedoms” said tony, an active service member.

But of course who can forget the children of liberation day. We asked Jared, who’s at his third liberation parade, what his favorite part is and why his family comes to the parade.

While we gave you a look at some of the families at the parade, lets check out the sights and sounds of the 72nd liberation parade.