Guam – San Vitores Road in Tumon was closed from Bishop Flores Loop to the Marriott intersection for four hours today after a powdery substance was discovered in an envelope at the Guam Visitor’s Bureau.

“It was a standard envelope,” GVB General Manager Karl Pangelinan told PNC. “It was actually addressed the first line was it said ‘Mayors office’ and right underneath it said Guam Visitors Bureau.”

According to Pangelinan, the envelope was opened at about 8:30 this morning and he was immediately notified.

“As we were walking back to the area where the envelope was located he kind of briefed me that they had opened the contents noticed some powdery substance and I believe there was something within the letter inside the envelope that indicated something regarding anthrax” Pangelinan said. “I stopped maybe about six or seven feet before it, noticed it on the desk at that point we just initiated our own internal emergency procedures.”

Pangelinan says tests later confirmed the substance was not anthrax but emergency officials ordered that the building be evacuated while an investigation was conducted.

VIEW video of the GVB evacuation scene shot by “Gerry On-the-Go” below:

“They isolated the three staff who were in direct contact with the envelope,” Pangelinan said. “The rest of us camped out right in front of the Proa restaurant and waited for them to do what they needed to do.”

Guam Fire Department Spokesman Lt. Ed Artero says GFD’s HAZ MAT component responded to the scene along with the National Guard CST which helped identify the substance and the Federal Bureau of Investigations. The FBI later took over the investigation. GVB was determined safe for reentry shortly after noon today and the roadway reopened at about 12:30pm.

“I think the response went really well today,” Artero told PNC following the all clear. “Our HAZ MAT component has been training very hard in the last three to four months. We just received a lot of new equipment from Homeland Security through grant funding and this was a real world exercise a real world operation and I believe it went really well.”

8:30 am: Guam Police cordoned off  the western end of Pale San Vitores at 8:30am. GPD has blocked all traffic in both directions from the traffic circle at the top of  the hill, down San Vitores to the Marriott intersection.

9:00am: There is no through traffic being allowed along that stretch of San Vitores past GVB at this time [Wednesday 9am].  Guam Police have blocked  Rt.14 Bishop Flores Loop to JFK Hill and all side streets (Ypao Road). No one allowed within that area.

10:15am: At 10:15am, Lt. Artero told PNC that the Haz Mat team is just suiting up and about to go into the building. “It is a slow and deliberate response,” he said because “there is no immediate threat.”

10:45am: FBI on site now to assist in investigation of  suspicious package at GVB. 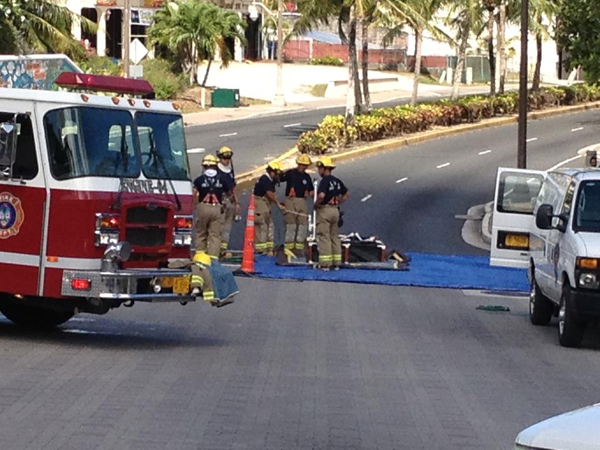 Guam Fire and Police have set up a command post at Takagi and Associates across from the GVB building.

Stay tuned to K-57 and the Pacific News Center for updates on this breaking story. 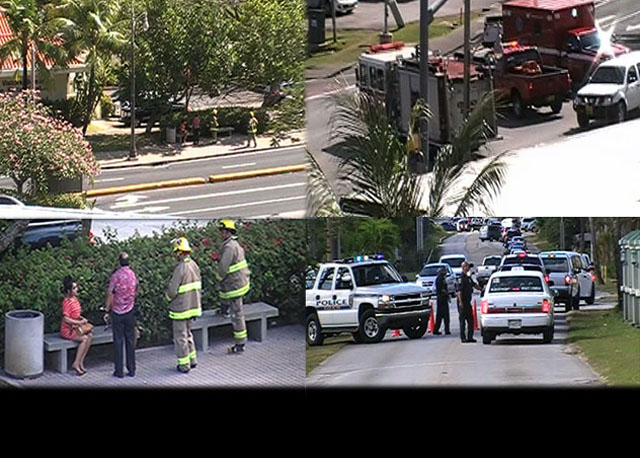