Spokesman Art Perez says that GPA dispatch reported the first power outage at 10:10 pm. The fire however was not called into 911 until later, at 10:28pm says GFD Spokesman Lt. Ed Artero.

There were no injures. The Cabras substation is un-maned, although a maintenance crew was on site when the fire began. In fact, Perez says, the two 20 megawatt generators inside the substation were not even running at the time of the fire.  It started outside.  A “fault” occurred in one of the incoming power lines leading to a transformer. In an electrical power system, a fault is an abnormal electric current.

The abnormal current level caused arcing, a surge of electricity between the power line and the breaker. Conductors and insulators at the transformer link melted under the blue and white hot arc that gave off a huge glow seen by many in Yigo and Dededo.

VIEW a 1:35 video of the arcing taken about a half mile south of the substation below:

That arcing also caused the rubber, insulating the power line to burn. It burned down the power line underground, burning into the substation, and burning within another underground pathway towards another transformer on the grounds. The underground fire created pressures that blew a manhole cover off,  splintering  it into 3 pieces. That was the explosion heard by many in the area.

The fire interrupted power delivery to the north, created a ripple effect back through the system forcing 3 base load units in Piti to shut down “for their own protection,” said Perez. Cabras #4 and MEC units #8 and #9 all shut down forcing Cabras Units 1 and 2  to take on the full load. But they couldn’t hold it and tripped off line too. By 10:50pm, Perez says, the entire island was blacked out.

At the scene, around 11pm, smoke, but no flames, was pouring out from a sliding door on the north side of the substation. Guam Firefighters appeared to have the fire under control.  About 30 yards from the substation, GPA technicians were gathered around the manhole where the explosion occured. Half of the manhole cover dangled in the hole. The other 2 pieces landed a few feet away.

The split parts of the manhole cover were charred black. Fire damage could also be seen on the power cables beneath.

Guam Police shut off Route 1 in Dededo and diverted all traffic onto Ysengsong Road while dozens of Guam Fire and GPA personnel investigated the scene.

GPA’s Perez said the first circuits began to be restored at 12:15 am to parts of Piti and Chalan Pago.  By 12:45am, he said 30% of the island had been restored, and 70% had their power back by 1:10am. Full power island wide was not restored until just after 4am. 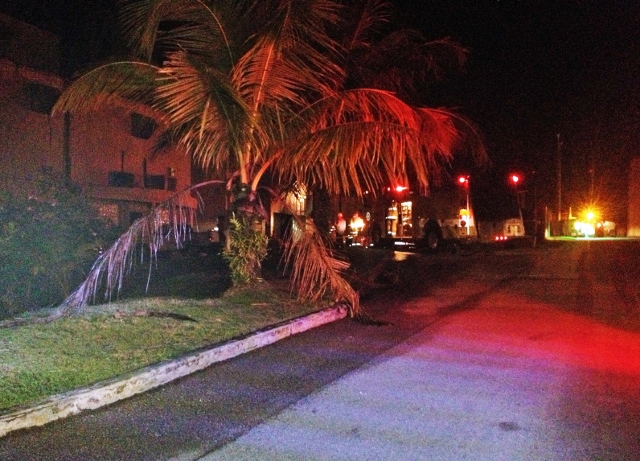 The cause of the “line fault” that started it all is not yet known, said Perez. However on November 3rd, 2010, a brown tree snake was blamed for a similar “line fault”which sparked “arcing” and melted GPA hardware on a power line running along Ypao Road in Taumining.  In that case too, breakers failed to isolate the fault, leading to an island-wide outage.

Thursday night’s all island blackout was the fourth since that November 2010 incident on Ypao Road.

READ the release from GPA below:

The Guam Power Authority fully restored service to customers at 4:40 a.m. today ending an island wide blackout that occurred at 10:40 p.m. last evening. The outage was caused by an electrical cable failure at the Dededo Combustion Turbine (CT) substation. The cable ignited and caused damage to other line cables, switches and line hardware equipment which precipitated a blackout.

“This event affected the island’s power grid causing instability which led to the temporary shutdown of three base load units: MEC Units No. 8 & 9 and Cabras No. 4,” stated Melinda Camacho, P.E., Assistant GM of Operations. “Other base load units, Cabras Units 1 & 2 remained online to stabilize the power grid, however these units experienced problems which led to the subsequent blackout.” She went on to say, “Unfortunately this isolated incident led to a series of unusual events causing our customers to lose power which we quickly rectified.”

GPA crews isolated the problem and coordinated restoration efforts utilizing backup generators and additional line personnel that were called to the field to assist.  As a result, power restoration began at 11:30 p.m. and continued on until power was fully restored island wide at 4:40 this morning.

Ms. Camacho concluded by saying “Our focus at this point is to ensure a similar line problems do not happen again.” The Dededo CT Substation is back in service and the damaged system has been isolated so it can be repaired.

In an electric power system, a fault is any abnormal electric current