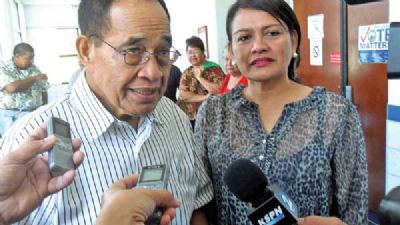 The former governor, who to his own admission said his weight is down from 249 lbs to less than 180 lbs., was ordered by Associate Judge David Wiseman to return to court for his arraignment tomorrow, Friday.

Wiseman said Fitial shall remain released upon the posting of a $50,000 property bond and appearance bond. He also directed Fitial to return to court whenever he is required to do so.

However, the associate judge said that Fitial’s notice to travel on May 5, 2014, to the Philippines for continued medical treatment has been documented and accepted.

Office of the Public Auditor legal counsel George Hasselback is expected to file an information today so they can proceed with the arraignment on Friday while Fitial is still on the island.