Guam – The Governor’s Office has confirmed that former Congressman and retired Marine Brigadier General  Ben Blaz has died at a hospital in Virginia. He was 85 years old.

Blaz had been in intensive care following a fall.

Governor’s Spokesman Phil Leon Guerrero says that all GovGuam flags have been ordered to half-staff in honor of Blaz’s passing.

Blaz’s last public appearance was here on island at the University of Guam.  He was the guest speaker for the 19th Presidential Lecture Series on October 21st.

His lecture was entitled “Remembrances and Realities” and he spoke to the to the students about the significance of knowing ones self and ones goal and he encouraged students to learn and be educated not only through reading, but through experience. 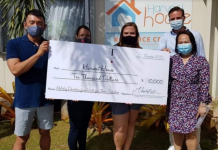