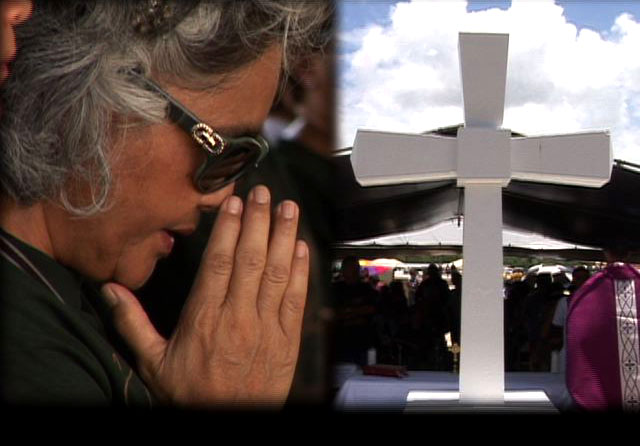 Santa Rita, Guam – It was “Back to Sumay” Saturday for dozens of former residents and their descendants, back to the remains of a village destroyed during the war,  the remains of which were absorbed by Naval Base Guam after the war ended.

A special mass and memorial was held near the cross of  Nuestra Senora de Guadalupe, the site of the former Sumay church and the loved ones buried in the cemetery where the old village of Sumay once stood, were remembered.

Naval Base Guam Commanding Officer Capt. Mike Ward hosted the event,  the 5th annual Back to Sumay Day.  And Santa Rita Mayor Dale Alvarez and his office co-ordinated the visit.

Before World War II,  Sumay was a commercial center,  known as the “Pearl of the Island”.  All that remains now is a cross from the Catholic Church, the cemetery and a few foundations of the old structures. The residents established a new village in the hills behind the Orote peninsula naming it Santa Rita.

“Well this is our fifth annual back to Sumay day. It started five years ago and I just asked the C.O. at that time if it would be possible to have a fiesta to bring my elderlies down here and reminice and some kind of fiesta and for all the kids to come and see what’s going on where their parents were born their grand parents and so far it’s been successful and keeps getting bigger and bigger,” said Santa Rita Mayor Dale Alvarez.

“It’s an opportunity to bring former residents families descendants who used to live in Sumay back into the area so they can reminisce about what it was like prior to World War II and build new memories to start from today and it’s an opportunity for our sailors to actually meet the residents and learn about the history we have here in Sumay”, said Cmdr. David Ellis Executive Officer of Naval Base Guam.

Following the Mass, visitors walked over to the Clipper Landing Park for food, music, cultural dancing and an historical display of photos dating back to pre-World War II Sumay.

Prior to the War, the village of Sumay occupied the Orote Peninsula, which forms the southern boundary of Apra Harbor. Once a thriving commerce center, it suffered severe devastation from bombardment by the United States military forces during the Liberation of Guam from the Empire of Japan. The U.S. military assumed control over the ruins of Sumay and built Naval Station, while the residents of Sumay were relocated to the hills between their former village and Fena. They established a new village, naming the settlement after Saint Rita.