Harmon, Guam – When visiting 17-year-old Hiroki Yamaguchi looked through a list of activities available in the afternoon portion of his school’s cultural and sports exchange day at University of Guam, he picked futsal and was thrilled with his decision.

“We don’t normally play futsal in school,” Yamaguchi said through a translator. “Futsal was my favorite activity today. Even though the Guam team was so strong, we still had a lot of fun.”

Yamaguchi’s teammate Shota Izawa also enjoyed playing futsal with other visiting Japanese students and local teams despite not playing the sport, or its outdoor version, soccer, often in Japan.

[Students from Japan’s Wasegaku High Schools who played futsal during a cultural and sports exchange day at the University of Guam Fieldhouse pose for a photo with local futsal players.]

“It’s only our second day, but we are having a lot of fun with the exchange program,” the 17-year-old Izawa said through a translator. “I liked playing futsal today the most.”

Yamaguchi and Izawa were among about 180 students visiting Guam from 11 different campuses of Wasegaku High Schools in Japan. Guam Football Association organized a mini futsal tournament at the UOG Fieldhouse as part of the students’ cultural and sports exchange day at the university. Several of GFA’s coaches and some players from Guam’s youth national teams participated in matches against the visiting students. 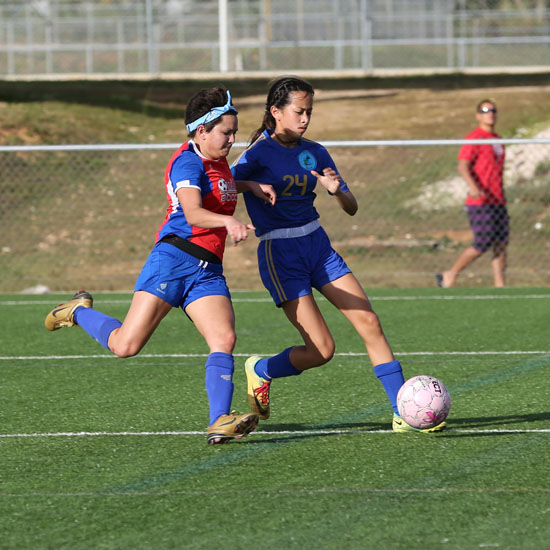 [Japan’s Hiroki Yamaguchi looks for a teammate to pass the ball as he faces defensive pressure from Guam Football Association’s F.J. Chargualaf in a friendly futsal match against visiting students from Japan’s Wasegaku High Schools during a cultural and sports exchange day at the University of Guam Fieldhouse.]

“The primary purpose of the visit is to provide the students the opportunity to understand and interact with people of different cultures – for some of the students, this is the very first time they’ve traveled outside of Japan,” said Michael Iwanaka local coordinator from H.I.S., the overall organizer of the school trip. “This is the eighth time groups of students from the schools have come to Guam and they’ve enjoyed a cultural and sports exchange day at UOG for the last couple of years.”

After opening speeches by university president Dr. Robert Underwood and the schools’ principal, the students enjoyed local dance performances. Later in the morning, the visiting students split up into 11 groups to man individual stations featuring different aspects of Japanese culture, including an origami station and a tea ceremony station, for curious local participants at the UOG Fieldhouse. After lunch, the students had the choice to play basketball or futsal, or participate in local dancing or weaving. All participants concluded the day with a short closing ceremony and a gift exchange.

The day’s events were made possible by the university’s English Adventure Program, which is part of UOG’s Professional & International Programs. The university worked with the Hurao Academy, Gef Pa’go, GFA, the UOG Sports Camp, the International Friendship Club and Americorps for the individual activities during the day. 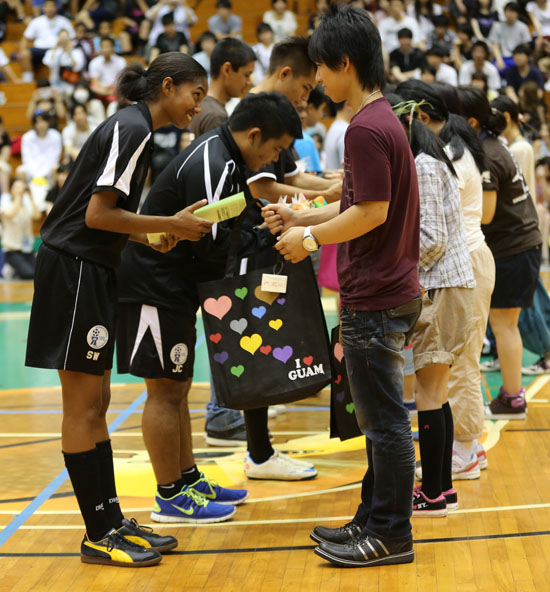 [Guam Football Association’s Simie Willter (foreground), J.R. Campos and F.J. Chargualaf represent the organization in a gift exchange with visiting students from Japan’s Wasegaku High Schools at the conclusion of the group’s cultural and sports exchange day at the University of Guam Fieldhouse.]

“We’ll generally play host to 3,000 visiting students per year,” said Russell S. Ocampo, UOG Professional & International Programs outreach coordinator. “Our biggest group so far was about 600. Generally, many schools will organize trips from November to January, our busiest time, but we also get many requests between June and September. We’ve had other groups from Japan, Korea, Taiwan, and Russia and we’re also hoping to host students from Hong Kong and mainland China, too.

“This year, we’re seeing a lot of interest and we’re excited,” Ocampo added.