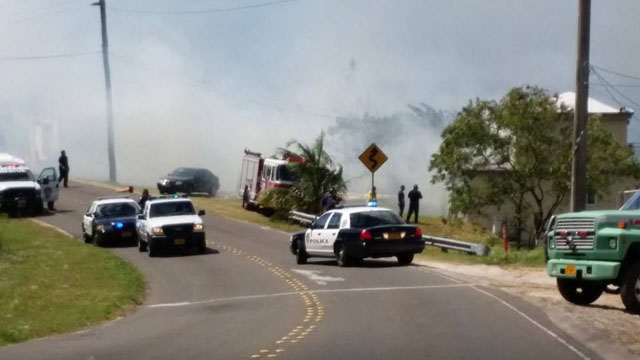 Guam – A section of Cross Island Road in Santa Rita was closed from 1:30pm to to about 4:25pm this afternoon as firefighters worked to contain a blaze in the area.

“The smokes is having a lot of effects you know in breathing and also the embers,” homeowner Felix Dydasco Sr. told PNC. “Every morning I get up and look outside the kitchen area and there’s bundles and bundles of embers.”

Dydasco lives above the valley the fire is burning in, on the north side of the road. His son, Felix Dydasco Jr. lives across the street and says a lot of the smoke has been blowing in his direction.

“The house is covered with ashes and the smoke has gotten some of the residents out of the homes,” Dydasco Jr said. “One of the ladies here today had to leave her house because the smoke was too much.”

While the area is prone to grass fires, Dydasco Jr tells PNC that its been four years since there was a fire this big in the area.

On behalf of the residents in the area The younger Dydasco thanks the firefighters who have been working hard to contain the blaze.

“(They’re) dealing with all this heat,” he said. “Doing a great job with what they can reach.”

GFD had the fire under control at 4:25 and was able to reopen the roadway.

READ the release from GHS/OCD below:

Roadways (below the chapel on route 17 to about a quarter mile after the chapel) are closed due to fire operations to extinguish the blaze.

Guam Fire Department has requested assistance from Guam Water Authority for water tankers and the Navy HSC25 has been requested to conduct water drops.

Residents can expect delays in route.

There have been no evacuations at this time.