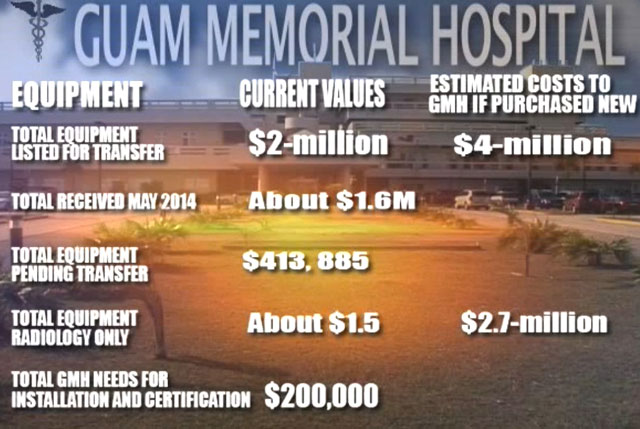 Guam – After about a year of planning, through the Department of Defense Equipment Systems Transfer Program, the Guam Memorial Hospital received $2-million worth of needed medical equipment courtesy of Naval Hospital and their move into their new hospital facility.

As of today, GMH received about $1.5-million worth of equipment, most of it in radiology systems.

Naval Hospital Commanding Officer Captain Jeff Plummer said the Navy had vital medical equipment to give and wanted to keep it in the region. He explained, “It was going to take a lot of effort on all parties mainly because coupled with a fact that we’re going to be using these medical equipment right up to the last days of operation, which is only three weeks ago. So we knew you had to learn the process but also to have all things in place so there’s a fine window to execute it.”

With that small window of time, the equipment has been transferred to GMH. However, the equipments are still in boxes and has yet to be installed, which GMH said will take two to four months and will cost $200-thousand.

GMH Administrator Joseph Verga said even if this windfall wasn’t in the hospital’s budget, he doesn’t see it as an issue, calling it “a small investment for a tremendous benefit.” He said that once the equipment is installed, the staff will be trained on how to use it before the equipment can be fully operational. He added that some of the new equipment to GMH, including the fluoroscopy machine and nuclear medicine, will expand the hospital’s scope of services.

Verga said, “It will greatly expand the scope of what GMH is able to look for and treat on island rather than sending people off island. You’ll be hearing more of additional services GMH is implementing to keep people on island, which has been part of our strategic plan and goal since Governor Calvo and Lt. Governor Tenorio brought me here. I’m looking forward to extending that capability to add more services to keep and treat people here on island.”

GMH Chief Planner William Kando said the hospital received a total of 130 line items and that the longest part of the whole transfer process would be installing, commissioning, and certifying the equipment as well as the rooms they are installed it at GMH.