Guam – The Guam Regional Medical City celebrated this morning with a topping off ceremony, marking several milestones for the much awaited northern hospital.

At the site gathering this morning, GRMC CEO Margaret Bengzon announced that they are that much closer to opening by June 2014. She notes that they have reached a point in construction and development in which the work is only going to get more challenging.

“Our schedule is very tight as you can imagine. The work is only gonna get more complicated. It’s going to require from us a lot more creativity in terms of thinking and problem solving. It’s going to call us to even higher levels of coordination and teamwork,” says Bengzon.

“The thing about the topping off ceremony is that it parts the movement from the exterior structure to the interior. And like I said, this is the most challenging part of the construction, but it’s also the more engaging part,” she adds.

Dededo Mayor Melissa Savares gave a warm welcome to all stakeholders involved in the new hospital project, highlighting its significance not just in the Dededo and Guam community, but in the region as well. From a personal perspective, Savares expressed her support for the hospital, disclosing her family’s experience with cancer.

“Many years ago we had the need to go off island when my son was diagnosed with cancer 21 years ago. But part of the healing is actually being around family and having the familuy support, and now we’re gonna have that opportunity for families not just in our island community but our region,” she expressed. 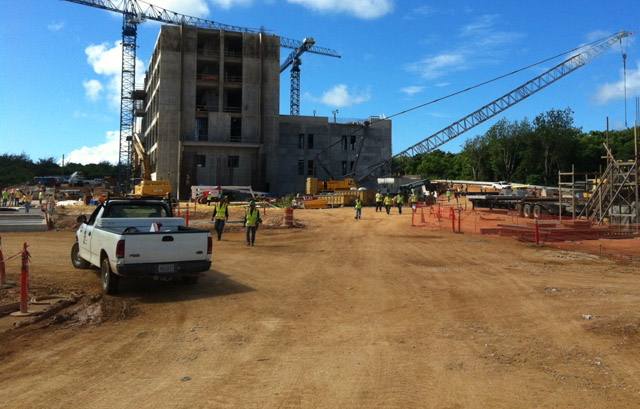 READ the release from GRMC below:

DEDEDO, GUAM, July 21, 2013:  Representatives from the Guam Regional Medical City held the “topping off” ceremony for the island’s first private hospital this morning.

The 215 million dollar project which began last November is expected to provide a new state-of-the-art, modern hospital facility with much needed 130 hospital beds, and health services for patients needing primary and specialty care to include cardiology, medical oncology, endocrinology, pulmonology and neurology.

“The schedule is very tight. The work going forward is going to become more complicated with many more moving parts.It’s going to require from us a lot more creativity in terms of thinking and problem solving. It’s going to call us to even higher levels of coordination and teamwork. We remain committed to the vision and the promise of the Guam RMC and draw inspiration from the broad based community support that this project enjoy,” said Margaret Bengzon, GRMC’s President and CEO.

Also during the event, the announcement of the winner of the Artist Competition was revealed. Thirteen artists have been invited into the final phase toward the Guam Regional Medical City’s $70,000 art commission. The winner for the art competition was Ms. Judy Flores. Her title of the art piece is – Where patients are partners – For life!