The 2 police officers inside were injured and taken to GMH.

GMH Nursing Supervisor Cely Mangrobang says one of the officers was discharged at mid-morning, the other was still in stable “under close observation” Monday.

The crash happened about 4am on Route 10 in Barrigada, by Roberto Street, right in front of the Baha’i Center, near the Vietnam Memorial Wall.

The patrol car was heading south on Route 10 when it cut into the opposite northbound lanes, spun left, and struck the pole broadside, on the passenger side of the vehicle.

Police Chief Fred Bordallo said the officers were responding to a burglary in progress when a vehicle pulled out from a side street into their path.

The Chief also said that the vehicle was totaled and can  not be placed back into service.

The crash remains under investigation by Guam Highway Patrol.

BARRIGADA – 4:00am, Saturday, January 11, 2014, Rt. 10 by Roberto Street, officers responding to a possible burglary in progress lost control of their patrol car when a vehicle pulled out from a side street in their path causing the officers to crash into a concrete power pole.

Both officers, (driver and passenger) were transported to GMH and are in stable condition. 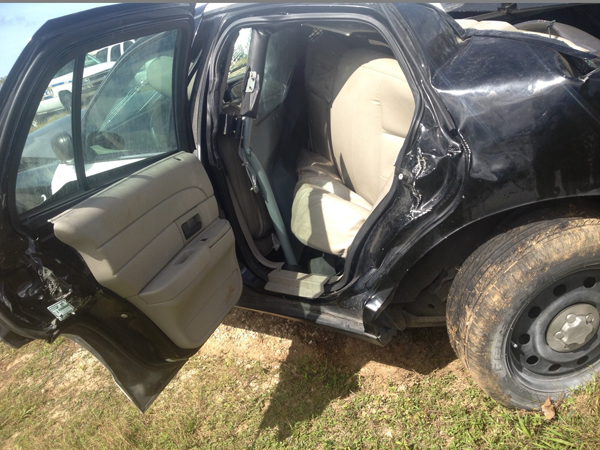