Spc. Justin N. Trusso, a native of Yona, Guam, earned the distinguished title after facing off in a head-to-head battle with his peers, top Soldiers and NCOs, from across the Pacific in this regionally-prominent event.

“I just want to thank everyone who supported me along the way – my sponsor, Edward Martinez, and most importantly, my family, mom, dad, and God,” said Trusso.

Trusso, a carpentry and masonry specialist with the 797th Engineer Company, 411th Engineer Battalion, 9th MSC, placed first in the Modern Army Combatives event by which some say is the most intense event, requiring a great deal of skill and stamina.

“When I first got here (to the combatives event), I wasn’t sure what to expect,” said Trusso. “Everyone looked equally prepared and there were guys a lot bigger than me, but going into the first fight, I felt good. I felt confident. The next fight, I was basically trying to remain calm, fight relaxed, and I came through.”

All the Soldiers were commended on their execution for participating in this year’s BWC, an occasion not easily come by. 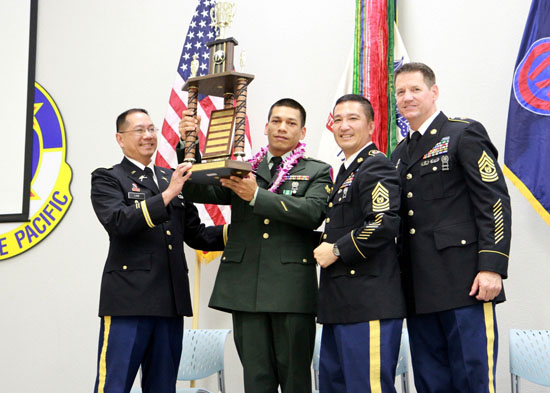 [Spc. Justin N. Trusso (left-center), a carpentry and masonry specialist with the 797th Engineer Company, 411th Engineer Battalion, 9th Mission Support Command, holds up a unit trophy, here, May 23, for being selected as this year’s Pacific Army Reserve Soldier of the Year. Trusso is one of two Soldiers who will go on to represent the 9th MSC at the U.S. Army Reserve BWC, scheduled for June 23-28 at Fort McCoy, Wis. (Photo by Army Spc. David Harthcock, 305th Mobile Public Affairs Detachment]

“To get competitors to come out and do this type of event is hard,” said Command Sgt. Major David Yamamoto, command sergeant major for the 9th MSC. “But from start to finish, they were the cream-of-the-crop.”

“They are our future,” Yamamoto added. “I couldn’t be any prouder.”

Command Sgt. Major Randall J. Harr, command sergeant major for the 303rd Maneuver Enhancement Brigade, 9th MSC, described the benefits of this challenge as indelible, providing an opportunity for young Soldiers and NCOs something to be proud of, and in turn creating camaraderie.

The regional competition may be complete, but the journey for this warrior is not over.

From here, Trusso will move on to represent his unit and the 9th MSC at the U.S. Army Reserve BWC, scheduled for June 23-28, at Fort McCoy, Wis.

“This (win) is just another way of putting Guam on the map,”  Trusso said. “My unit, the 797th Engineer Company, we’re out there, and we’re coming strong.”

About the 9th Mission Support Command: It is a U.S. Army Reserve command assigned to U.S. Army Pacific located at Fort Shafter, Hawaii. It serves as the headquarters for all Army Reserve Soldiers in the Pacific Theater, with major subordinate units in Alaska, Hawaii, Guam, Saipan, American Samoa, Japan and Korea.The week-long affair focused on essential Soldier skills including physical fitness, weapons marksmanship, land navigation, and combat lifesaving. The grueling competition pushed 11 Reservists to their intellectual limits and tested their physical endurance.