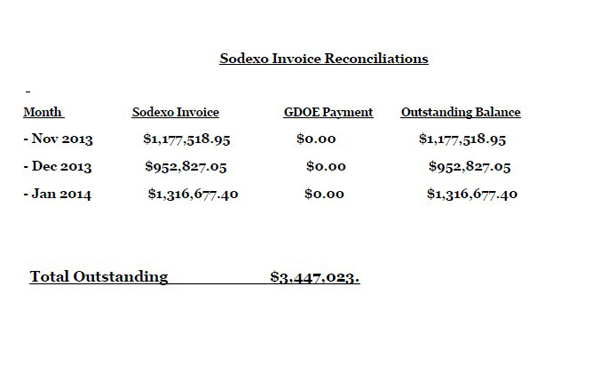 Guam – PNC News has learned that the Guam Department of Education is 3 months behind in its payments to food service provider Sodexo.

DOE officials say they are engaged in “reconciliation discussions” with Sodexo over a bill that totals over $3.4 million dollars.

The invoice shows billings over the past 3 months. In November over $1.7 million is still owed. In December nearly a million was billed, but un-paid. And in Janaury $1.3 million was billed. The total amount billed to GFuam DOE by Sodex for the 3 month period is $3,447, 023.

In a telephone interview late Thursday,  Deputy School Superintendent Robert Malay said  “final reconciliation has not been completed between the vendor and the Department of Education. “

However he said a partial payment to Sodexo was made today, Thursday, and the reconciliation process continues. He could not say how much of a payment was made.

The discussions he said revolve around questions over the number of meals served at the islands public schools by Sodexo.

There are 40 schools,  with thousands of students getting breakfast and lunch every day,  about 20 days a month.

Malay also pointed out that most of that $3.4 million billed by Sodexo is reimbursed by the federal government.

PNC News contacted Sodexo and left a message for Resident District Manager Mike Supple seeking his comment on the amount that was billed. As of this posting, he had not returned our call.